Imagine this: there have been a ton of burglaries in your neighborhood. As a result, your neighbors have started to post fake home security signs all over their front yards and in visible areas around their homes.

They’ve also started posting fake security stickers on their windows. As you look around, you wonder: “Should I do the same?”

If you want to keep yourself, your family, and your home safe, it can be stressful to figure out the best way to do this.

It’s also overwhelming because there are so many options, from using fake security signs to installing a home security system.

The tricky issue is knowing whether using these fake signs might actually work. Sure, they might deter a burglar, but will they actually help protect your home? And if enough people are using them, will burglars not take them seriously?

In this article, we’ll review whether fake security signs actually work for helping to protect your home.

This way, you can use the right security strategies and finally rest easy knowing that your home is safe from break-ins. Read on to learn more.

In order to decide whether you want to use fake home security signs, you need to know what the potential pros and cons of using them are. This way, you can decide if you want to go this route or use another security strategy.

The pros of displaying fake home security yard signs are that they’re less of a hassle to use, they’re cheaper than investing in a real security system, and the signage can sometimes be enough to help protect your home.

Less of a Hassle

There’s barely any work involved in sticking a sign in your yard or pasting one on your front window. They’re also easy to find online, whether you’re looking for or fake ADT yard signs or ADT stickers. All you have to do is pay and wait for them to be shipped to you.

Cheaper Than an Actual Security System

A sign might work, even if it’s the only security system you have in place. However, because many people use signs to deter burglars, it’s becoming a method that many burglars are starting to not be deterred by. However, it’s better than nothing.

However, there are some pretty big cons of displaying fake home security signs. These include that you could end up violating copyright, fakes are easy for burglars to spot, and you’re actually at risk when using these signs.

When you’re displaying fake home security signs, you might be violating copyright. For this reason, you should double-check company regulations about this issue and check what regulations are in place for doing this in your state.

Easy for Burglars to Spot

Often, it’s easy for burglars to be able to tell that the fake sign you have up is a fake. If it’s a fake security company, then they’ll definitely know. But even if you buy fake ADT security signs, the sign might be slightly different than a real one.

If it really is an accurate fake, burglars still know that it’s possible it could be fake-so they could easily check to see if there’s an actual security system in your home to confirm their suspicions.

When you’re using fake signs, you’re actually putting yourself at risk. You’re giving yourself a false sense of security when you do this, making yourself feel like you have a security system when you actually don’t.

As a result, you might be less careful about your security. This, combined with the fact that many burglars break in even when you have a fake sign-up, will put you more at risk.

Another big issue with fake security signs and fake decals is that it might be illegal to use them. Depending on your state and jurisdiction, the copyright issue might get you in trouble with the security company. You might have to pay a fine or go to jail.

Additionally, there might be rules in your neighborhood or area that don’t allow people to do this. This could also mean you’d end up paying a fine. 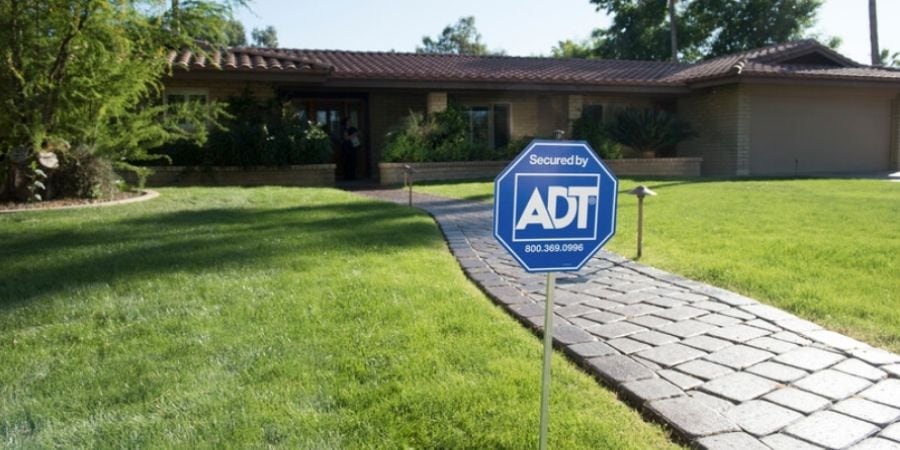 There are better solutions to help protect your home. If you’re thinking of using a fake ADT sign, avoid doing this. Other options that will provide better security include outdoor lighting, home security cameras, dogs, and more.

Outdoor security cameras are a great burglar deterrent because they know you take your home security system seriously. Additionally, they’ll be afraid of getting caught on camera because this could more easily identify them and send them to jail.

When setting up your outdoor security camera, place it somewhere visible and in an area where there’s a lot of foot traffic toward entrances.

When this light goes off, it forces the burglar off his path. It also signals to him that you take your security seriously, so he’ll be more likely to avoid burgling your house later on.

Additionally, outdoor lights are a great way of alerting you that there’s someone lurking outside. When you see the light go off, you can check your camera footage to see if something sinister is going on.

Install these lights anywhere where there’s foot traffic near your entrances.

Another great way to keep burglars off your property is by having a dog. Even though it’s an old-fashioned solution, it works. Obviously, this works better if you have a larger, tougher-looking dog than a little chihuahua.

You can also train your dog to scare off potential burglars. To do this without the risk of scaring off welcome visitors, check out this guide from PetHelpful.

Additionally, you can put up ‘Beware of Dog’ signs whether or not you actually have a dog. This might be enough to scare off a potential burglar.

However, keep in mind that this has many of the same problems as using fake home security signs. Also, some burglars might not be as scared of dogs as others.

For this reason, it might be smart to train your dog and use some of the additional strategies in this article.

Depending on what your neighborhood rules are, you might be able to install security gates as well as doors in front of your home. This will automatically make your home less accessible, which means it will be less likely to be broken into.

Even if burglars want to get onto your property, they’ll stick out like a sore thumb if they try to climb over your wall. A neighbor could easily see them trying to break in and call the police.

Additionally, when you have a high wall with security gates, it’s difficult for burglars to see the interior of your home. This means they can’t research its layout to plan a break-in.

They also won’t be able to see if there are any items inside they want to steal.

Good Relationship With Your Neighbors

A good relationship with your neighbors is another great way to avoid having your house be burgled. If you get along well, then they’ll agree to watch your home when you’re away on vacation. Also, if they see something funny going on, they’ll tell you or call the police.

You can even ask them to go into your house, turning on lights every once in a while, when you’re out of town. This way, burglars considering breaking in will think you’re home when you aren’t.

Smart locks are another great way of helping to protect your home from burglars. You can get immediate alerts on your phone that tell you whether you’ve left your front door or garage unlocked after you’ve left home.

Additionally, some smart locks are combined with security systems. If someone seems to be fiddling with one of your locks, you’ll find out immediately.

Now that you know about the pros and cons of fake home security signs, whether they’re legal and alternative solutions, you might have some questions about these fake signs. That’s why we’ve put together this list of FAQs and answers.

Fake home security signs can work some of the time, so it doesn’t hurt to have them if you’re aware of the danger of having a false sense of security and it’s legal to use them in your state and area. However, they aren’t that effective compared to other methods.

For this reason, we recommend, if you choose to use them, to combine their use with some of the alternatives we’ve discussed in this article.

Security signs can sometimes deter burglars since they’re more likely to rob a home near yours that has no signs on its lawn or windows than yours which does. However, many burglars are aware of the fact that people use fake signs now.

As a result, if they see a sign out front or on your window, they’re likely to check out your home as a potential place to rob. They’ll look at the sign carefully to see if it’s potentially fake. If it is, they’re more likely to break in.

This is because they might think that you don’t have another security system in place. As you can see, while fake security sign provides some protection, it can actually make it worse.

Is It Illegal to Have a Fake ADT Sign?

Depending on what copyright laws are like where you live, it might be illegal for you to have a fake ADT sign. In addition to being potentially illegal, it might also not be allowed by your housing development or neighborhood.

Do your research to find out if it’s allowed for you to use the sign. If you can’t find answers that make you comfortable, you should speak with a lawyer about this.

If you’re looking for an alarm system for your family, look no further than ADT.

We’re experts when it comes to home security, and we offer many different types of security systems, including smart home security installations.

To learn more about how we can keep your home safe, check out our home security services here.