Proper camera placement is crucial for deterring theft in restaurants

By every standard, a restaurant is an odd retail space. Employees and customers interact closely, but the acts of receiving the product and paying for it are more disconnected than usual. You can't take the product back once it's been delivered, and people can make additional purchases without having paid for what they've already received.

Nowhere else works on the same basic service and payment model and, as a result, nowhere else has quite the specific security needs found at restaurants. Many restaurateurs wonder where to put security cameras in their establishment, to minimize theft, vandalism, and general bad behavior. Here's a guide to help make that decision-making process easier.

Some restaurant security cameras should be visible

The first thing to realize about camera placement in a restaurant is that a restaurant is a common space every bit as much as it is a place of business. That means that some of the basic ideas about social engineering in public spaces can be applied here, more so than they can in a corner store or electronics shop. People spend time in a restaurant, and the impact that cameras have on their experience is a major business concern.

On one hand, restaurants must be cognizant of alienating their clientele with a feeling of insecurity or that they are being surveilled, especially higher-end establishments. But visible exterior cameras, and one or two at the entrance and perhaps at the door to the kitchen, can make customers feel more at ease without triggering these negative reactions. The feeling of security, especially for employees, can have an enormous impact, as well.

A conspicuous camera near the door will also help deter the so-called "dine and dash" phenomenon. A camera pointed toward the parking lot can also help to alleviate this, as it threatens to capture license plates and other identifying information as people leave the area. It can also greatly increase the sense of security, along with adequate lighting, when unaccompanied people return to their vehicles. 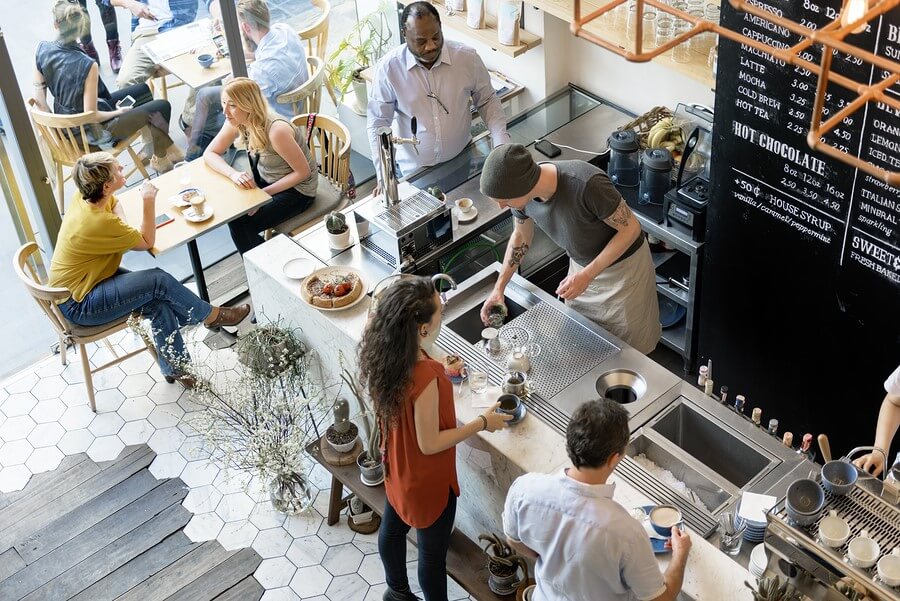 When considering where to put security cameras beyond highly visible spots, the main concern is actual field of vision—when a camera isn't seen, its only function is to record. With that in mind, a discreet camera by the cash register is a must, but make sure that employees know that the camera exists. With that knowledge in place, not only will theft be less likely, but employees will know what sort of customers behavior is being captured, for later review.

Hidden cameras also allow you to capture more detailed views of an unwanted face—experienced thieves or vandals will often know to hide their face from visible cameras, making it harder to take and hang a picture of them where employees can easily recall them. Since their footage is usually reviewed after the fact, hidden cameras are used mostly to respond to problems that have already occurred, rather than to head them off in a preventative way.

That said, hidden cameras are also the best choice to monitor whole rooms for movement after-hours, so they can trigger an alarm. Visible cameras should be placed so it's impossible to avoid their field of vision, but a hidden camera is still a superior choice for this job.

It's tempting to place cameras, especially visible cameras, all over the establishment, from the freezer to the preferred smoking area behind the building. It's possible that this could have a slight impact on productivity, perhaps slightly reduce the length of breaks, but it will also foster a feeling of resentment. Cameras can install a feeling that employees need to "get away" with regular behavior, and that dynamic can become a self-fulfilling prophecy that ends up souring the employee-owner relationship.

Privacy is also a crucial concern, especially for the employees who spend such a huge portion of their life in the restaurant. Labor codes vary by region, but generally there must be a verifiable business reason to install a camera within a non-public working environment, and that includes the kitchen. Most restaurateurs can get away with some camera placement, but past the point of allowing basic shift monitoring, additional camera placement can lead to legal headaches.

Modern cameras, especially smart, connected cameras, can be used for all kinds of non-security functions as well. A well-programmed camera system can let you keep track of an interior-exterior line for seating or check the back stockroom without leaving the front desk. Think critically about where your business could recoup the most possible value from cameras, both visible and hidden.

The benefits of using well-placed cameras

Just remember that cameras are useful both for their ability to record and their ability to convince people that they are recording. This combination of accountability and deterrence can do a lot to maintain security, accompanied by trustworthy and vigilant staff, of course. Even in the most challenging workplaces, a combination of good practices, good technology and good people can keep the real criminals at bay—and the bad behavior to a minimum.

Get a FREE Quote & ADT Offers