It was 4:45 a.m. and 74-year-old Dot Brown was asleep and alone in her Milledgeville, GA home. Suddenly, she was awakened by the piercing sound of her ADT alarm. Thinking it was a burglar, Dot grabbed her pistol from a nightstand and walked out of the bedroom to investigate. 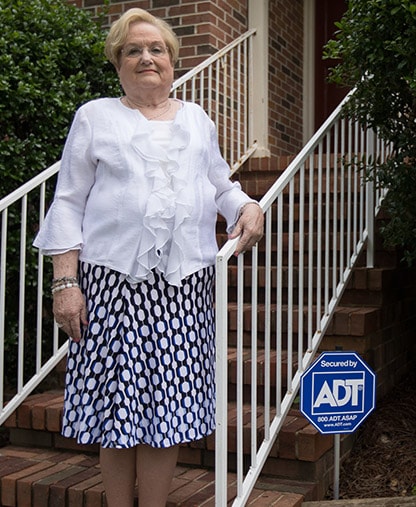 Seconds later, ADT Dispatcher Tiffany Chantaca phoned Dot from ADT’s Customer Care Center in Irving, TX where the alarm signal was received. Tiffany told Dot her smoke detector had activated and the fire department was on its way. She advised Dot to evacuate.

Dot was exiting the home when a policeman rushed in and exclaimed, “Your house is on fire.” As the officer helped Dot outside, he noticed the pistol still in her hand.

“In the excitement of the fire, I didn’t realize I was still carrying my pistol,” said Dot. “I handed it to the officer for safe keeping.”

Soon, firefighters from Baldwin County Fire Rescue arrived and battled the blaze. They even sawed part of the floor to reach boards which were still smoldering. Investigators determined an electrical short in the home’s HVAC system sparked the fire.

Even though the flames were minimal, heavy smoke created significant damage. Dot had to live three months in a motel. Now back in her home of over 40 years, Dot was glad to meet all those who helped save her life, including Tiffany, at a LifeSaver event on May 25.

“I gave her a big hug and thanked her for saving my life,” said Dot.

“What a thrill meeting Mrs. Brown and hearing her amazing story,” said Tiffany. “I am proud to have played a part in helping keep her safe.” In the excitement of the fire, I didn’t realize I was still carrying my pistol.

Dot also met Firefighter Deryl Nelson who was first on the scene that night. 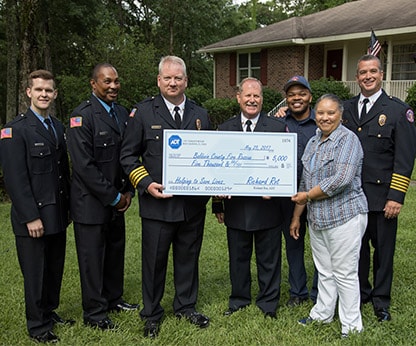 “It's wonderful to see Ms. Brown smile because in my career, I've seen some people that didn’t make it from house fires,” said Nelson.

“So far this year, at least 37 people in Georgia have died in residential home fires,” said Fire Chief Troy Reynolds.

The Chief accepted a $5,000 contribution from ADT saying, “We will use the funds to purchase a Sparky the Fire Dog costume to help educate school children about fire prevention.” 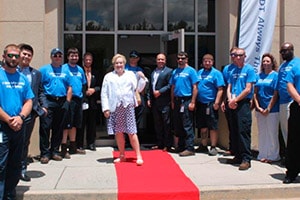 Following the LifeSaver event at Dot’s home, everyone travelled to the ADT branch in Macon where there was a Meet a Customer for Life lunch. Greeting Dot upon arrival with a ‘red carpet’ welcome were Macon team members wearing “I Help Save Lives for a Living” shirts. In addition to Rich Rot, other ADT leaders attending were Greg Daly, ADT Regional Vice President and Brant Lee, ADT Area General Manager as well as Andrea Jackson, Unit Manager, Irving Customer Care.