She looked very pale, she was having trouble breathing.

Dec. 1, 2015. You name it and Faith Markley can bake it. Wild berry muffins, cinnamon rolls, salted caramel beignets, red velvet cake — the Hemet, CA. homemaker loved nothing better than spending time in the kitchen with her flour and rolling pin, crafting delights for her husband, Chris, relatives and friends. “I liked the creativity,” Faith says. “And you can make a tin of muffins for a dollar when it costs five dollars at the store.” On a Tuesday evening, Faith was finishing up three hours of baking and getting ready to serve a family favorite, “breakfast for dinner” for Chris, Faith’s son, David, 28, and his girlfriend, Holly. They would never eat that meal. Below are the accounts of Faith, Chris and ADT Dispatcher Kate Ballard, along with comments and safety tips from the National Fire Protection Association*.

Faith Markley: The oven had been going at 350 degrees. I put the roast in for the next day and turned the temperature to 425. I heard a “pop!” and within ten minutes the ADT alarm had gone off. Then I got an email alert [on my phone] from ADT that said it was a carbon monoxide (CO) leak. At the same time, I got a phone call from the ADT dispatcher. She told me that CO had been detected in my home, they had dispatched the fire department and that I needed to get myself and my family outside. She reminded me to get any pets out of the house; my husband got Toby, our English Cocker Spaniel. Within minutes, the fire department rolled up.

Faith: Chris opened windows as the firefighters got out their equipment. They determined the oven was the source and said the CO was excessively high. They shut off the gas [to the oven] and after about 45 minutes the levels got down to what they considered safe.

The fire department asked [how we] felt and we said okay. But I had started feeling strange. I had tingling in my lips and tongue. I was lightheaded and dizzy, my whole body felt weak. I thought I was coming down with the flu. Within ten minutes of the fire department leaving, I got violently ill. The last time I felt that ill was when I had a heart attack in 2014. I Remember My Husband Saying, 'Honey, Stay With Me!

Faith: My husband put me in the car. When we got to the emergency room, they did an oxygen reading and found I had only 85 percent oxygen [when normal blood-oxygen saturation is 95 to 100 percent]. From there, it gets a little fuzzy. The respiratory therapist put an [oxygen] mask on my face and was sticking a needle way down into my wrist to get my arterial blood gas reading. They told my husband I had carbon monoxide poisoning. They would need to flush my system with high levels of forced oxygen.

I heard them say if they couldn’t get my CO level down they would have to [transport me] for treatment in a hyperbaric chamber. I looked at my husband’s face. His eyes were red and puffy. I remember my husband saying, “Honey, stay with me!” I was so weak and groggy, all I could do was mumble. I remember thinking to myself, I know my husband is okay but is the family okay? Is my puppy okay? I wanted to voice the words but I couldn’t.

Chris Markley: It was one of those situations where time stands still. She looked very pale, she was having trouble breathing, I could see the pain on her face. She is claustrophobic and I thought it could almost be as deadly for her in a hyperbaric chamber — the stress on her heart. I was scared to death. She is the love of my life. I would be totally lost without her. 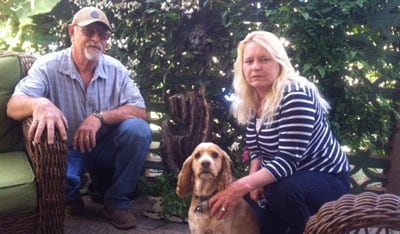 Judy Comoletti, division manager for public education, National Fire Protection Association: Carbon monoxide can be anywhere in the home when there is any kind of fuel-burning device — a gas stove, a gas fireplace, a home heating device. It’s known as the invisible killer because you can’t see, smell or taste it, but it builds up in your system over time. If you are sleeping, you may not wake up. The best protection: A carbon monoxide alarm outside each sleeping area and on every level of your home.

Doctors were able to get Faith’s blood-oxygen levels back up and discharged her the next morning. She would have to return to the hospital twice over the next few days; Chris, who had flu-like symptoms of his own but dismissed them to focus on his wife, would also get treated for CO poisoning. Both are better now, but Faith is still regaining her strength and overcoming her fears.

Faith: I have periods of feeling very lethargic and I get headaches frequently. We have an electric countertop oven for now. [For a while after getting out of the hospital], I felt scared and depressed. For the longest time [after the incident], the only thing I would bake in was a crockpot. Last month, I was like, ‘Okay, I can do this.’ I made cinnamon rolls. It felt really good to make them but I noticed they didn’t taste or feel the same; they came out gummy. Maybe I didn’t leave them in long enough. I wasn’t in the kitchen [while they baked]; I just waited for the beeper to sound and went back in. I used to love making my family happy with my baking and the smell of baking and I loved being in the kitchen. Honestly, now, I am afraid to go in. I spend as little time in the kitchen as possible.

Faith: I’ve really gotten into gardening. We have zucchini, butterleaf lettuce, tomatoes, peppers, parsley, sage, rosemary and thyme — the whole Scarborough Fair. We have navel orange, satsuma plum and golden delicious apple trees, blackberries and a living plant wall of jasmine and honeysuckle vines. Now, I have to be outside. I know those plants are breathing oxygen back into the atmosphere. I need to know I always have a source of fresh air.

I realize I could have died. ADT helped save my life. I wouldn’t be alive today if it hadn’t been for that dispatcher and that system.

Chris: Had we not had ADT, we would have all gone to bed that night. The next morning you would have had four dead people and a dead dog. It opened my eyes. Things in a home can go horribly wrong. You have to make sure your house is safe.

ADT Dispatcher Kate Ballard: When I found out [what had happened], I was dumbfounded: Four people and a dog. It didn’t really click until the day I actually met them [at an ADT LifeSaver award ceremony in January 2016]. Suddenly, here was this person telling me I had helped save her life. She said, “We’re best friends forever now.” I was humbled. I was just doing my job. It was everybody working together that helped save these people’s lives.