Nov. 29, 2015. Thanksgiving weekend was winding down, but Azim and Madhavi Saifee of Basking Ridge, NJ, had a full house. With daughters, cousins, an aunt and uncle upstairs, and grandparents on an extended visit from India staying in a basement guest bedroom, 12 family members in all slept under the Saifee's roof that night. After an evening full of good food and family stories, Madhavi went to bed feeling deeply grateful heading into the New Year. She had nearly died in a snowmobiling accident at the end of 2014 and now was on crutches from a recent orthopedic surgery. "It gave me a great deal of perspective on what is important in life," she says. "Your health, making sure your husband and kids are happy and healthy, having family around."

That night, all those things would come under threat.

Below are the accounts of the Saifees, Bernards Township Police Chief Brian Bobowicz, Liberty Corner Fire Company Deputy Chief Ron DePasquale and ADT employee Krista Brandenburg; and advice from the National Fire Protection Association* around the CO leak in the Saifee home that threatened their lives. 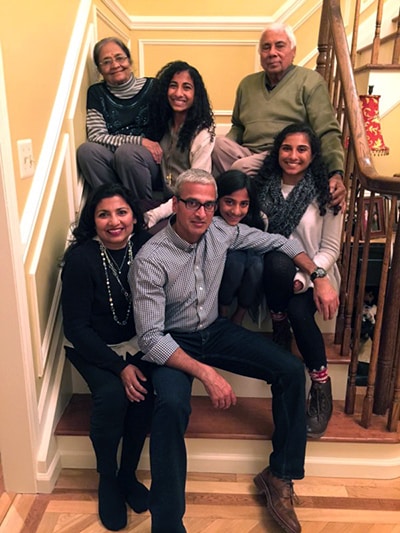 Azim Saifee: At 6 a.m. [Monday, Nov. 30] my alarm clock went off. I woke up my daughters for school and then went back to bed. I had to catch a flight for a business meeting that afternoon, so my plan was to sleep in a bit. Then, at 6:17 a.m., the ADT alarm went off. My initial thought was that somebody downstairs had opened the door and triggered our alarm system. It was very loud. I tried [to shut it down] with the keypad in our bedroom, but it kept going off. Besides the ADT system, we also had a portable carbon monoxide detector plugged into the upstairs hallway [that was going off], so I tried to take the battery out. My goal was to shut everything off so we could all go back to sleep.

ADT Dispatcher Krista Brandenburg, 29, typically works the overnight shift at ADT’s Irving, TX, monitoring center. She was logging some overtime when she sat down at her station at 6 a.m. EST.

Krista Brandenburg: I remember the call because I was thinking, it’s a carbon monoxide alarm — I hope nobody is in that house. Following protocol, I first called the fire department. Next, I called the house with no answer so then I tried [Madhavi's] friend [on the emergency contact list] and she answered. I said, "It's their carbon monoxide alarm; could you get in contact with her?"

I was the first car there. Our firefighters are all volunteers so it can take them a few minutes to respond. I knocked on the door and rang the doorbell. Mr. Saifee answered in his pajamas. He was holding the portable alarm and seemed confused. I asked if there were other people in the house. He said there were people all over the house because family was staying over. I said, "Why don’t you go upstairs and rouse your family? You need to make sure that everyone is awake. Talk to them to make sure they are not lethargic. Ask whether they have a headache." From my limited training, I know those are some of the indicators of carbon monoxide poisoning. And I asked them to open the windows to get some fresh air.

Every year, more than 400 Americans die, 20,000 are seen in emergency rooms and 4000 are hospitalized as a result of accidental (and non fire-related) carbon monoxide (CO) poisoning, according to the Centers for Disease Control and Prevention. In winter, people fire up gas and oil furnaces, warm themselves by fireplaces and wood-burning stoves and use portable generators and heaters, all of which can produce the deadly gas if improperly functioning or poorly ventilated. CO is impossible to detect unaided — you can’t see it or smell it — and it can build up in your system. Symptoms of CO poisoning—headaches, dizziness, nausea or vomiting, feeling tired or confused—can be mistaken for the flu, according to the CDC. "Between ADT and the first responders, we have a safety net." 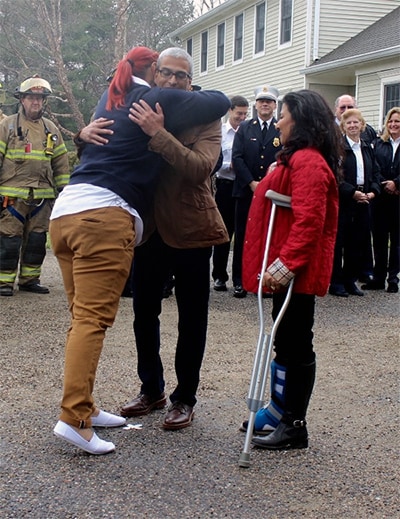 Madhavi: I had gotten up and hobbled on my crutches to the hallway at the top of the stairs. I saw the police chief and heard him say we needed to wake everybody up. So I went around to the bedrooms. My aunt and uncle got up right away. The cousins with the kids were pretty groggy but they sat up in bed and made sure their kids were awake. Our daughters were already in the shower.

Chief Bobowicz: I opened all the downstairs windows. I found a set of grandparents in the basement bedroom and woke them up. They were in their bed clothes, so, to respect their dignity, I said, “Please get dressed.” I went back upstairs. The youngest daughter had her backpack on and was bee-bopping her way out to the school bus stop. I stopped her and said, "Good morning. How are you?” She was very nice but said she had a headache, which she thought was because of the alarm. While the alarm was loud enough to wake you up, it wasn’t loud enough to give you a headache in that short a time. I told her, "You’re not going to school. We’re going to have you checked out. "She started politely arguing that she had to go to school. I said, "No, it’s better that you don’t go." She called for her dad and I told him, “Your daughter needs to be checked out."" It’s better to be safe than sorry because you don’t know what levels of carbon monoxide her system absorbed.

After the crew from the Liberty Corner Fire Co. arrived, they walked through the house, taking carbon monoxide readings.

Deputy Chief Ron DePasquale: We are looking for a zero reading and have concern about anything above 9 parts per million. Our crew reported they had readings of about 30 parts per million on the first floor and 60 parts per million in the second floor bedroom area. In the 60 parts per million area, there may not be immediate health effects but that’s where prolonged exposure is more of a concern. The fact that there were levels that high early in the morning led us to believe the level of carbon monoxide was building quickly.

Chief Bobowicz: When I saw the [firefighters’] carbon monoxide meters lighting up with red lights and sounding off alarms, I asked the chief what that meant. He said the numbers were high. I said, “How high?” And he said, “High enough that we all need to leave.” And it hit me again — the windows had been open a while and they were still getting readings that caused the alarms. It was kind of scary. We evacuated the family and I called for a second activation from the volunteer Liberty Corner First Aid Squad.

As the Saifees learned, and experts advise, the best protection is a working CO alarm. "It can make the difference between life and death," says Don Bliss, vice president of field operations for the National Fire Protection Association.

Madhavi: Chief Bobowicz said the carbon monoxide was at evacuation level and everybody needed to get out of the house. I felt confused. Evacuation level? But we made our way downstairs. We had our coats on over our pajamas and waited in the garage because it was cold out. The [first aid volunteers] checked our pulses and asked us questions — were we feeling nauseous, did we have headaches? They checked the [cousin's] baby and five-year-old.

Shaila Saifee (age 15): It was confusing because I was waiting at the school bus stop and got called back. Looking back it was much more serious than I thought.

Zarin Saifee (age 11): I had to go into the truck and they took my blood pressure. Thankfully, I was fine. But it was still scary.

While the precise cause of the carbon monoxide was never determined, Deputy Chief DePasquale says the CO buildup probably came from a gas furnace and water heater in a closed-off room. The Saifees now keep that door open and plan to replace the solid door with a louvered door. Without their early-warning system, "the accumulation of CO over time could have been fatal," says the NFPA's Don Bliss. "That early warning got them up and got the [first responders] there. It saved their lives."

Madhavi: When the firemen walked through our house with these meters, rattling off the numbers, it didn't mean anything to me. It wasn't until I saw the fire report a few days later when it really hit me. You just think, thank goodness. Krista did what she was trained to do and did it well; she didn't miss a beat. Thank goodness the police and firefighters showed up when they did. They are all amazing people. I just feel relief and gratitude that we are all here and healthy. And I'm kind of glad 2015 is over. 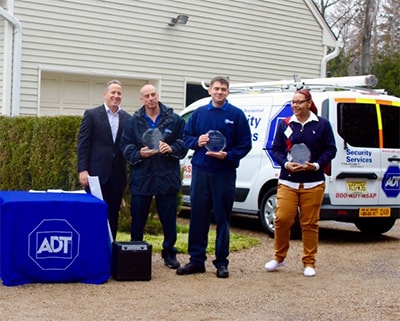 Krista: To know that I helped in any kind of way is just amazing. You can’t get a better feeling than that. I could win the lottery right now and I would still be thinking about this.

Azim: The sobering thought: Had the carbon monoxide built up to even higher levels and had we not been awakened from our sleep, it could have been catastrophic. I recently went out to dinner with some friends — just the guys. Some didn’t know if they had carbon monoxide detectors or not. The lessons I learned: If you don’t have a carbon monoxide detector, get one. Preferably have one that’s part of your home alarm system. When the alarm woke us up, we had the ability to react. But had carbon monoxide poisoning occurred, we could have been unconscious and even if the portable alarm had gone off, we couldn’t have responded to it. No one would have come to our rescue. Between ADT and the first responders, we have a safety net. If anything happened to us, there would be someone there to help save us.