If I lost my dogs, I would be devastated.

A Pet Isn’t Going To Call 911: How This Veteran Saved His Dog After She Started A House Fire 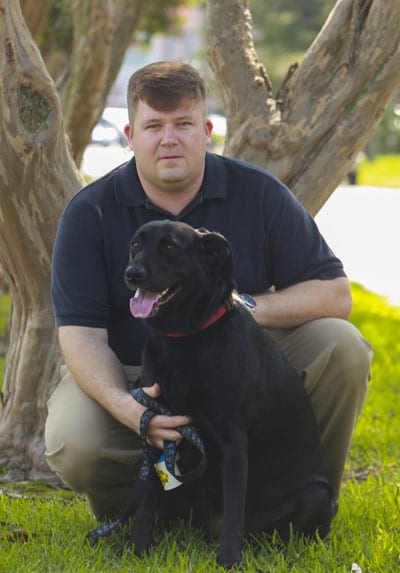 Lt. Commander Chris Sacra knows a thing or two about fire. A 17-year Navy veteran, he is trained in basic firefighting and he’s put that training to use many times while on duty. "I don’t profess to be an expert," says Chris, who is 39 and lives in Norfolk, VA, "but I know how quickly it can escalate. I know, with fire, time is not on your side."

That lesson would become personal on the evening of June 26, 2014, when a fire broke out in Chris’s kitchen while he was driving into town to go grocery shopping. No one was home — no one, that is, except for Sophie, Chris’s three-year-old Labrador Retriever, his best friend and constant companion.

Below are the accounts of Chris (whose comments reflect only his views and not those of the U.S. Navy) and ADT Customer Service Representative Michael Gervase, with comments and information from Pets for Patriots*, the National Fire Protection Association** and the American Kennel Club***.

Chris Sacra: I had grilled turkey burgers on a cast iron skillet on the stove. After I finished eating, I took Sophie for a 40-minute walk around the neighborhood. She loves walks. If I say, “We are going to go walkies,” she will jump with all four legs in the air. When we got back, I grabbed my car keys and left for the grocery store.

I had driven maybe two miles when my cell phone went off. It was ADT. The dispatcher told me they had a smoke alarm going off at my house and did I want him to send the fire department. My initial thought was that it must be a false alarm. I had just left my house and everything was fine. But I said “Hold on.” I had the ADT pulse app so I could pull up the [security] camera on my phone. ‘How is she going to get out?’

I could see there was smoke blacking out the picture in my dining room. I said to the dispatcher, “Yes, there’s smoke. Please send the fire department.” I told him “Hey, my dog is in the house.” And I thought to myself, ‘How is she going to get out of the house if there is nobody there?’ And I turned my car around.

Michael Gervase: I had only been taking phone calls for about two weeks at the time. I was brand new. I didn’t get any answer at the house but I got Chris on his cell phone. He saw smoke on his camera and asked me to call the fire department, so I promptly did that. I noted that there was a dog on the premises [and that information was in Chris’s ADT file]. I’ve had dogs most of my life and I love dogs. My wife and I have two dogs of our own — Max, a Cairn Terrier, and Heidi, a Chorkie, which is a Chihuahua-Yorkie mix. If I lost my dogs, I would be devastated.

Chris: As I was driving back, I had to stop at a red light. I saw a fire truck [from the Norfolk Fire Department] with the siren on pulling in front of me. I said to myself, “I bet they’re going to my house.” While I was waiting at the light, I used the ADT pulse app to unlock the front door so they wouldn’t have to break it with an axe. When I got there, the firefighters were hopping out of the truck and unloading equipment. I stopped the car and ran out and opened the door.

Sophie was right there waiting. She was happy, like, “Oh, you’re back!” But I could see the house was filled with smoke in the kitchen, living room and dining room. Sophie had gotten stitches for a cut and she was wearing one of those collars — the “cone of shame.” I took her to the front lawn and told her to lay down and I pet her. I didn’t go in the house. I wanted to let the professionals do their job.

(The National Fire Protection Association says, in the event of a fire, people should evacuate the house immediately; they should not stay in the house or go back in to try to find or rescue pets — firefighters are trained in search and rescue. “There have been people who have not survived after reentering a burning home,” says Judy Comoletti, NFPA’s division manager for public education). 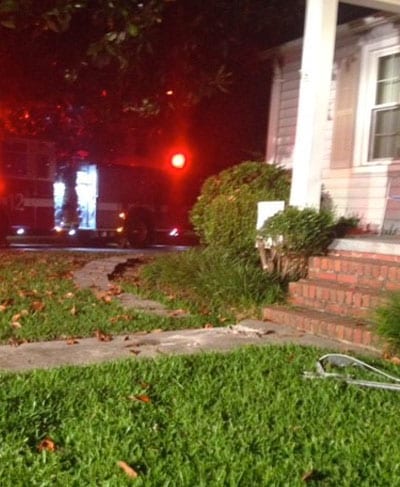 A Paw on the Burner

Chris: It turned out that Sophie had jumped up and put her paws on the stove to get at the skillet that had the turkey grease. She somehow had pushed the left front burner knob and turned on the gas burner. I had left one of those plastic microwave trays for cooking bacon on the metal grill and that caught on fire. That sent flames to the microwave over the stove. When the firefighters ripped it out, it was a mutilated heap. There was so much soot it was unbelievable. The entire kitchen ceiling was black.

Chris adopted Sophie in 2013, after his dog, Samantha, died of cancer a year earlier. He got help from Pets for Patriots (petsforpatriots.org), a national nonprofit that helps military servicemen and women (active and retired) adopt dogs and cats who need homes. To date, the organization has facilitated 1,082 pet adoptions.

Chris: I never had dogs growing up. But when we were little, my brother and I always talked about how one day we would have a house and a dog. I like having a dog as a single person. No mater what happens during the day, when I come home she is always happy to see me and I can tell her about my day and she is there to wag her tale and lick my face. And it makes you social—you walk your dog and people come up and ask about her. Sophie has a big cushion next to the bed but if she bugs me during the night, I let her come up and lie on the bed. She has to be touching me or leaning against me. For me, it’s the closest thing to having a child.

Pets for Patriots Executive Director Beth Zimmerman: Chris was really hurting after his dog Samantha died; she accompanied him all over the world whenever the military relocated him. Chris wasn’t ready to bring another pet into his life and he had gone into one [Norfolk] shelter repeatedly. One day, Sophie picked him and he knew it was right. Many of these dogs and cats have been abused, or this is their second, third or even fourth chance at a new life. Veterans each have their own story, too. Many are returning from combat with wounds, seen and unseen; others may be lonely; some may want to help fill the void of their absence when they deploy. They develop a remarkable empathy with these animals, and it’s amazing to see how they bond.

Back in Knoxville, ADT’s Michael Gervase didn’t know what the outcome of his call to the fire department had been.

Michael: One of the ADT managers called me into the office and told me what had happened. They told me that the dog’s life had been saved and that Chris wanted to meet me. I was flabbergasted. I didn’t do anything special. I just did what I was supposed to do. But it’s a great feeling to know that you have helped save basically a family member for someone.

On August 6, 2014, Chris and Michael met at an ADT LifeSaver award ceremony at Chris’s home. 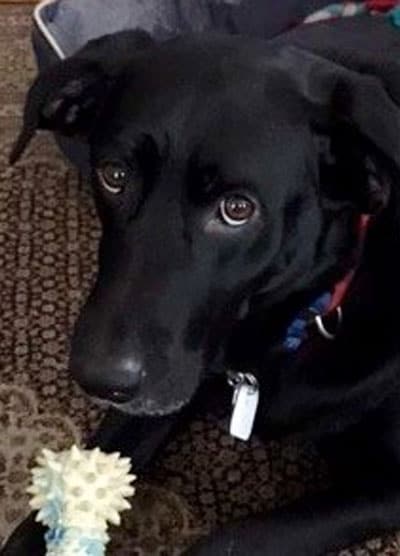 Michael: Chris is in the Navy and I’m retired Navy and my first duty station was Norfolk, so he and I traded notes a little bit. And Sophie is a sweetheart. She’s like a big puppy. Chris sees Sophie the way I see my dogs — they mean so much.

Chris: When I met Michael I said, “Thank you very much. You saved my dog’s life.” He reached out and he pet Sophie right away. I called ADT the next morning and said “I want you to know that the ADT system saved my dog’s life.” If my alarm hadn’t gone off, if ADT hadn’t called me or the app didn’t work, and the firefighters, they were on a call but went directly to my house — if all these people hadn’t done their jobs, it could have turned out pretty ugly and this could have been a sad story.

I learned that when you leave your pet alone, it’s like leaving a child at home. You have to make sure your house is pet-proofed. I went out and bought those stove-knob protector things they sell [for young children] so she couldn’t turn the knobs on. Now, I don’t leave anything flammable on top of the stove ever. Also, after I cook on my stove, I take the pot off right away and put it in the sink. When your pet is home and you are out, there has to be some way for the fire department to be alerted. Because a pet isn’t going to dial 911. They can’t call for help. They can’t open the door and go outside. They are dependent on us. 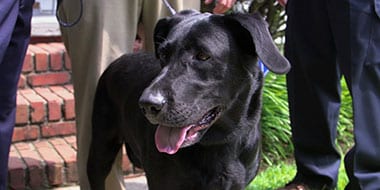 Sophie jumped up on the stove to get at a leftover skillet that had some turkey grease in it and somehow turned on the front burner that started the fire.

Read his story
Talk with an ADT
Security Specialist.
Get a FREE Security Quote