June 25, 2013. Colleen and Terry France were about to sit down to a barbecued-steak dinner at their home in Wildwood, FL. with their 7-year-old son, Jacob. But the carefree early summer afternoon would turn into the most terrifying moment of their lives when a troubled young man sneaked into their home and terrorized them.

He was a distant relative of Terry, a contractor who had given the young man work and let him stay in his home for a short time. Below are the accounts of Colleen and Terry, ADT monitoring center dispatcher Karen Montesano, Sumter County Sheriff’s Detective Jeffrey Cohen, and Wildwood Police Cpl. Anthony Tucker.

Terry France: I was cutting up my son’s steak on the kitchen counter when I heard [the ADT alarm] go off. He had come in through the garage. He was naked except for a rug he had wrapped around him. He said, “Come on, let’s go!” Before I could say anything, he grabbed me by my hand. I was holding a steak knife, and I said, “Unless you take it by the blade, let me go.” Then he [heard the beeping], let me go, and started running through the house yelling, “Where’s Jacob? Where’s Jacob?” 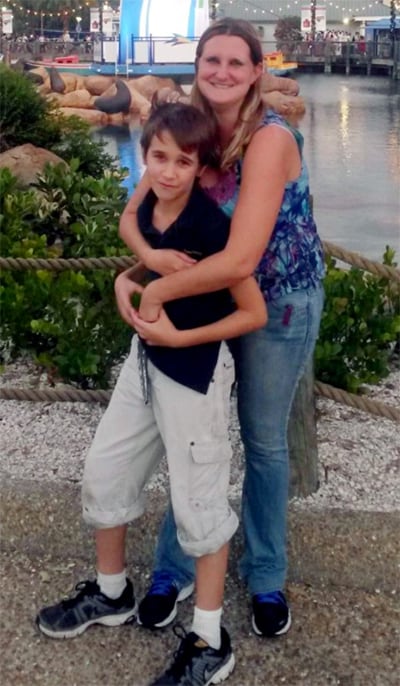 Colleen France: I was getting something out of the refrigerator when he burst through the door. I said, “Oh, my God.” The hair on my arms stood up. My first thought was: I need help. I have ADT. I ran into the mud room where we had the ADT panel. I just pressed all the buttons. Jacob heard the commotion in the kitchen and had come out of his room. I said, “Jacob, run and get in my car” — I had left it unlocked — “and hide in the back seat.” Terry ran out to get a neighbor [who was a sheriff’s deputy] but he wasn’t home.

[The intruder] was looking under my bed and calling out Jacob’s name. “Jacob, I am here for you, let’s go!” he said. I could hear doors slamming, and then he came back and was two feet from me. He said, “You’re next, b****. I am going to f*****g kill you.” Then all I could hear were sirens. He ran out the front door, jumped in his car, and said, “See you later, suckers.” All I could think was, I have to stop him. Because if he gets away, he will come back and kill us.

ADT monitoring center dispatcher Karen Montesano was at her computer at ADT’s Rochester, N.Y., monitoring center when the alert came up on her screen. Montesano, a retired elementary school teacher and grandmother, typically handles about 20 alarms an hour.

Karen Montesano: I think [Colleen France] pressed all the buttons on her keypad. I just started dispatching. I got hold of fire and medical and the police, and I told the [911 operator] that there was no answer at the residence. I went right on to another alarm, and didn’t know the outcome for a couple of days. Colleen pressed all the buttons on her ADT keypad"

There were an estimated 741,291 aggravated assaults (usually involving a weapon) in 2014, up 2 percent from a year earlier — FBI, 2014 Crime in the United States report

Sumter County Sheriff’s Deputy Jeffrey Cohen (now a detective in the criminal investigations division) was on road patrol when the emergency dispatch call came over his radio.

Detective Jeffrey Cohen: I remember someone saying they were getting multiple 911 calls from the police, fire, and EMS, that someone had broken into their home, that there was a struggle over a knife and the subject had fled in a vehicle. I decided to go down a main road because if someone was going to flee [from the Frances’ address], they might come that way. I observed a vehicle in the oncoming direction. I looked at the driver. He had a look about him — something wasn’t right. I could tell by his face, that’s the person.

I turned around and activated my emergency lights, and attempted to do a traffic stop. He pulled into the oncoming [traffic] lane and drove through a red light. I turned on my siren and went after him.

He was driving slowly with his window open. At one point, he had stopped his car. He had his hands up like he was praying. I jumped out of my patrol car, drew my gun and yelled at him to get out of the car. But he continued driving. I called out “Stop the car!” But he didn’t, so I got back in my car and continued the chase.

Wildwood Police Officer Anthony Tucker (now a corporal in charge of foot patrol) was the next of several police to join the chase. After about 10 minutes, the suspect was cut off by a police roadblock. According to Tucker and the police report, Wildwood Police Chief E. W. Reeser approached the car with his gun drawn and leaned in the driver’s side window when the suspect tried to grab his gun; Tucker tasered the man through the passenger-side window. Officers handcuffed the 5’11”, 235-pound suspect and got him out of the car; the man was saying he was Jesus Christ, according to the Sheriff’s report. Cohen made the arrest.

Corporal Anthony Tucker: He was naked and he was mumbling all kinds of stuff. He was just off. He had that look about him.

Back at the France house, Colleen was trying to calm her son.

Colleen: Jacob was in shock. He said, “I thought my mom and dad were dead.” I hugged him and I told him everything was okay. A moment later, the police pulled up. “Did you get him?” I asked them. “They said, ‘Yes, we got him. And we think he killed someone.’”

“Most law enforcement officers out there are doing the right thing. I want people to know that every day, officers put their lives on the line to help them” — Sumter County Sheriff’s Detective Jeffrey Cohen.

The man was the prime suspect in the killing of his grandmother earlier that day. According to the Sheriff’s office report, he told deputies that God had told him to kill his grandmother. The court ultimately ruled he was not guilty by reason of insanity in that case and he was committed to a treatment facility. For the Frances, though, the story did not end there.

Colleen: Jacob was traumatized. In school, he would take all his personal stuff and hide in the bathroom. The guidance counselor helped him realize he was safe. But just [the other night], he said, “Mommy, I never let you out of my sight so I don’t get snatched.” I’ll get up at night to get water, and I’ll see him checking the house to make sure the alarm is on. [After it happened], I couldn’t leave the house for a week. That summer, I went back to work [as an elementary school teacher]. It was a blur. People at work told me I had PTSD. I felt like I lost a year of my life.

Then it was like I snapped out of it, and I was like, we are going to live life to the fullest. Every month now, we take a vacation. I need my family with me, I need my dog with me. I make the most of my family time.

Colleen says she is amazed at the way so many people came together to help save her family.

I always say if it had to happen, it happened the right way. Everybody just pulled together. If one person had dropped the ball, he would not have been caught. Everybody had a different role, and everybody had a very important role. Oh, my goodness, they all saved our lives. I still run into [Det. Cohen] around town, and I thank him profusely every time I see him. We would not be here if it weren’t for ADT. If I hadn’t pressed the button, the alarm would not have distracted him, he would have been able to stab Terry, he would have found Jacob in my car. It was crazy to think [Karen Montesano], someone so far away, cared about us.

Karen Montesano: I was just the dispatcher. I got the authorities going, and then it was up to the authorities. I was very proud to be part of the team. It was an emotional thing.

Anthony Tucker: It was one of the highlights of my career, with all the teamwork — the dispatchers, ADT, the sheriff’s office, our department — that together we were able to catch this violent person so that he couldn’t hurt anyone else. Being able to protect people is very important to me. It’s why I got into law enforcement. I want to help and make a difference. Jeffrey Cohen: I felt relieved and elated. Had we not gotten him, who knows what else he would have done. But nothing I did that day did I do alone. We all worked together as a team. We were honored by ADT, and it was nice. But there are people who do things every day who don’t necessarily get noticed. Most law enforcement officers out there are doing the right thing. I want people to know that every day, officers put their lives on the line to help them.

I just moved into a house, and I now have ADT for my alarm [provider]. I was impressed with their response. They were very quick to get us dispatched. It’s one thing to have an alarm that goes, “Beep, beep, beep.” If you don’t have anyone behind it to act on it, it’s pointless. [With ADT] we can push the buttons and know somebody is going to take care of it. Hopefully, we don’t have to take advantage of it. But it’s nice to know it’s there.