This is a story about a war veteran, a toxic house fire and a revelation that escaping harm’s way isn’t always about luck and cats.

Luck sometimes needs a little assistance in its day-to-day heroics. This harrowing event started one late night when homes are supposed to be resting quietly. “I was sitting watching a ballgame around 2:00 am in the morning,” said James Arnold from Kingsport, TN, “when the wall next to me exploded into fire from ceiling to floor. I made two giant steps and grabbed a big fire extinguisher that I keep there. I turned around and couldn’t see a thing, just lots of brown black smoke.”

“I took one more step and that’s the last thing I remember, I passed out cold.”

Now you’ve heard about life or death situations. Meet one of them. The fire was consuming the house by the second. Toxic fumes were spreading. And Mr. Arnold was on the floor of the kitchen unconscious. Fortunately, firefighters responded to his monitored fire alarm in about four minutes. They saw smoke coming from the left side of the house and quickly noticed Mr. Arnold lying unconscious at the back end of the kitchen floor. Bursting through his door, the firefighters quickly dragged Mr. Arnold outside where a rescue tech started performing life saving techniques.

“I remember,” said Mr. Arnold, “them putting me in a chair out of the way, then my sister arrived and took me home for the rest of the evening. The next day it was kind of a nightmare seeing everything that happened to my home. If I had a chance to talk to the dispatcher, I mean I would be so grateful and just thank her so much.” 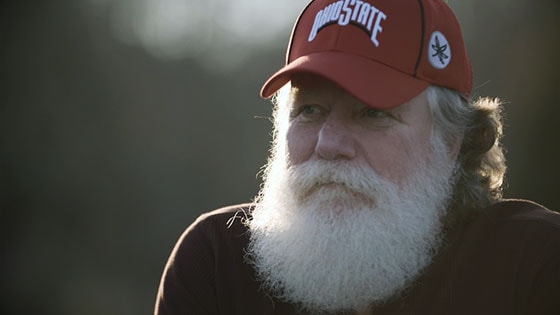 “Stacy, God love you. You saved my life, thank you. You rock.” “He’s a great guy and he was a veteran in the war,” said Stacy Stacey Fioravanti, ADT Dispatcher, “and the fact that I was able to help keep him here for his grandkids means a lot to me because I lost my grandfather a couple of years ago.”

According to a firefighter on the scene everything went perfect that night, from the alarm going off to the quick response. Added Mr. Arnold, “I’m very lucky. If I didn’t have that ADT system I’d be dead right now. I shouldn’t be alive and I wouldn’t be if it wasn’t for the alarm that alerted the fire department.”

Not long after the event an emotional LifeSaver Celebration was held at The Arnold Home. Attending were James Arnold. Stacey Fioravanti the ADT Dispatcher and Bobby Dale, ADT Sr. Vice President. Additionally, Fire Chief, Ben Wexler and the Warriors Path Volunteer Fire Department were awarded $10,000 for the department’s quick response and much appreciated alliance with the ADT team.

And that’s very happy conclusion for Mr. James “Trapper” Arnold. You might say “luck lucked out that day” -- with a little quick assistance from ADT and some very dedicated firefighters.