"I barely made it out alive with my dogs"

Every house fire has its own personality. This is the story of a home fire with a 1500 degree temper that was fast, focused and ferocious. 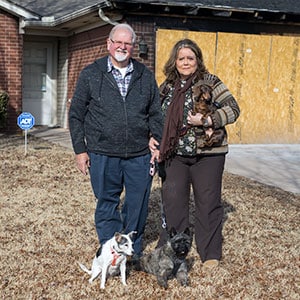 As homeowner Gene Mendicki* of Norman Oklahoma states, “It was a morning like every other morning.   I kissed my wife goodbye in the driveway, brought the trash barrels out and went back in the house -- that was the beginning of the end.”

“I got a call from the ADT Dispatcher telling me they’re getting an active fire alarm from my house. I told her, that’s where I’m at. There’s no fire here,” states Mr. Mendicki. “The dispatcher said, ‘if you go to the control panel, I’ll show you how to disable the alarm.”

“So I left the outside and went into the house to the laundry room, where the control panel is. Then the smoke hit me in the face. I didn’t even have  time to turn it off, I had to run.”

Mr. Mendicki raced to the back door to let the thee dogs out and went to find the cat, but only made it a few feet before the ceiling began falling in. He made a dash for the front door as the debris fell down behind him. 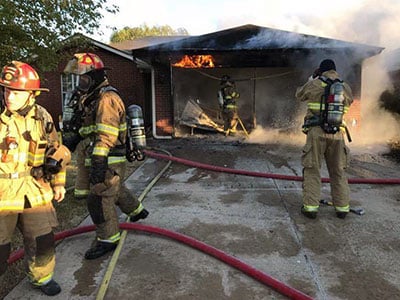 “I am grateful for the quick call from ADT”

The fire started in the home’s garage where it quickly engulfed a refrigerator which created incredibly intense heat, spewing toxic fumes. Within minutes, the home was destroyed.

“I was on the phone with the dispatcher while I was getting the dogs out of the house. Distracted, I put the phone in my pocket and went back to the phone later and heard the ADT lady saying, Mr Mendicki are you there? Are you there?  She could have just said, ‘have a nice day and hung up,’ but she didn’t. She stayed with me.”

Afterward, a firefighter on-scene explained the smoke was so toxic and the flames so intense, it would have quickly killed anyone in the house, literally cremating everything in its path. But everyone did their part in determining a safe ending -- a perfect example of home fire safety at its best. “I am grateful for the quick call from ADT which notified the Norman Fire Department, said Mr Mendicki.” “Thank God we’re all here.”

This is the story of a burning house and the fury of fire. Everything was destroyed -- but not the loyalty, dedication and quick thinking of those who are charged with keeping the Mendickis safe from harm.