She heard someone walking toward her bedroom.

How To Survive A Home Invasion We sincerely wish it never happens to you, or anyone for that matter, but find comfort that protective steps can be taken in advance should anyone ever break into your home when you’re alone. For instance, take Suzanne Smith. By herself and asleep in her Houston home, she was awakened by the shrieking noise of her ADT burglar alarm.

By instinct Suzanne quickly fled to her bathroom. Holding the door shut, she heard someone walking toward her bedroom.

Behind the bathroom door, her phone close to her ear, Suzanne held onto the reassuring voice of ADT Emergency Dispatcher Stacey Fioravanti. “I spoke in a hushed voice because I didn’t want the intruder to know where I was hiding, said Suzanne.”

It was Stacey who called the police and kept Suzanne calm until they arrived. “It was a relief hearing the ADT operator tell me the police were minutes away.” Luckily for Suzanne the police did arrive quickly and arrested the home invader.

“A big part of our professional training is preventing customers from panicking when there’s an emergency,” said ADT Emergency Dispatcher Stacie. “I stayed on the line until police arrived. Later, I learned they made an arrest and everyone was safe.” "I spoke in a hushed voice, I didn’t want the intruder to know where I was hiding" 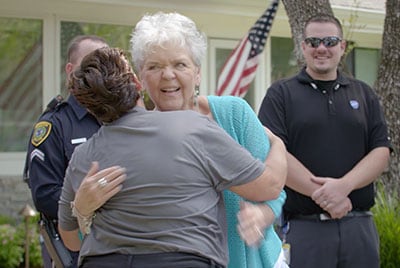 Suzanne didn’t know the intruder and had no idea why her house was targeted, but she is certain that ADT and the first responders helped prevent her from death or injury. “Without the monitored alarm system, who knows what could have happened to me,” said Suzanne.

It is for life threatening situations like Suzanne’s that ADT believes in acknowledging and rewarding those who come to the rescue. An ADT Lifesaver Event was held recently and Suzanne was able to reunite with Stacey. “I was thrilled to meet Stacey today and give her a hug for helping me.”

Stacey also received ADT’s highest honor from Lynn Langston, ADT Senior Vice President of Customer Care, who presented Fioravanti with a LifeSaver Award, her third in 18 months. “Stacey epitomizes excellence and is representative of her thousands of colleagues who work around the clock at our six U.S. monitoring centers protecting millions of people every day,” said Langston. Langston also awarded $10,000 to the Texas Association of First Respondersto help police officers, firefighters and other emergency personnel who are injured on the job.

How do you survive a home invasion? For Suzanne the answer was very simple. ADT and it’s very special and very much cherished relationship with America’s first responders.