Mia was saved by an ADT smoke detector. 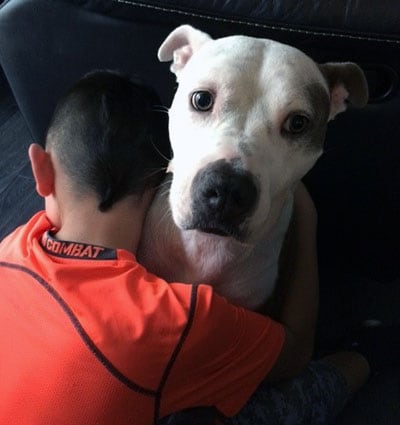 An affectionate pup who lives a happy life with a loving family in Miramar Florida. Mia was saved from a house fire that almost took her life and the fire, given a few more minutes to gain momentum, would have taken her family’s home as well.

The story began like most stories of this kind. A normal, average family at home. Adam and Heidi Lowenstein were at their house with their boys, 12-year-old Dylan and 11-year-old Randy. The family left around 6:30 pm for one of the boy’s soccer games.

During the game’s last quarter, Adam received a call from ADT saying that heat and smoke signals had been received from their house and they had alerted the fire department who was on its way.

Without hesitation, the family ran off the field and drove home, expecting the worst. Adam and Heidi imagined the house in flames and although the soccer field was just a couple of minutes away, the few blocks home felt like a cross country trip.

The family arrived and the firefighters were already inside the house. There was significant smoke with no visibility inside. Adam just started screaming for Mia.

The firefighters would not let the family inside, but they soon learned the fire was out -- and Mia was safe.

The cause of the fire? The on-scene firefighters informed the Lowenstein’s they didn’t turn off the stove and the chicken was left cooking. Everything happened within minutes. They also said 10 minutes more and everything would have been gone including Mia. The Lowensteins are ADT employees. They understood that almost 500,000 pets die in home fires each year because their owners don’t have monitored protection. When the Lowensteins bought their home they chose the safety net of 24/7 ADT protection.

Who did not disappoint.

Both Adam and Heidi imagined the house in flames.