"I am receiving a heat sensor signal from your garage. Is everything okay?"

The dinner table was cleared, the dishes were done, and Amy and Tim Steffens had settled their kids — Ella, six, and two-year-old Parker — for the night before turning in themselves. But what started as a typical Tuesday evening would become a waking nightmare — with their lives at stake. Below are the accounts of Amy and Tim, ADT monitoring center dispatcher Sherry Broyles, and Wayne Township, IN Fire Department Capt. Michael Pruitt.

Tim Steffens: The phone rang around 12:30 a.m. The [ADT keypad] alarm was beeping. I wasn’t sure what it was. I started walking down the hall to the kids’ rooms. Amy picked up the phone.

Amy Steffens: [The caller] said, “This is Sherry with ADT Security Services…I’m calling because we are receiving a garage heat detector signal …Is everything okay?” Honestly, we thought something was wrong with the keypad. I couldn’t smell anything. We had five or six [non-ADT] battery-operated smoke detectors, and not a single one was going off.

Sherry Broyles, a grandmother of four in Maryville, Tenn., works the 5:30 p.m. to 2 a.m. shift at ADT’s Knoxville monitoring center.

Sherry Broyles: It was late into my shift. A red banner came up [on the computer screen indicating] the garage heat sensor. I know heat detectors go off before smoke detectors do. That means you have [more] time to get people out. I called and Amy picked up the phone. I told her, “I am receiving a heat sensor [signal] from your garage. Is everything okay?” It was a few minutes before she said, “Something’s on fire!”

Amy: I got halfway down the stairs when I smelled smoke. I got to the garage door and I opened it, which you are not supposed to do. I saw bright orange flames shooting straight out. I started screaming, “Fire, fire, fire! We have to get out of the house!” I started running up the stairs. Tim had both the kids and I will never forget the terrified look on my daughter’s face as he was dragging her down the hallway by the arm. I was in such a panic.

Sherry: I said, “You do have a fire? Then you need to get everybody out of the house, ma’am.” I heard her scream, “Kids! Get the kids!” Inside, I was screaming with her. I thought, “Oh, my gosh. There are children.” Then my mind went, “No. I have to keep my composure to call the next number: the fire department.” As soon as I got off that call, I wrote down their name and address and gave it to a [coworker] who was working after my shift ended. I said, “This is a real fire. Keep an eye on this one for me. I want to know that they made it out.” I thought about that call all night long. A Matter of Minutes

Capt. Michael Pruitt of the Wayne Township Fire Department was on duty when the call came in.

Capt. Michael Pruitt: Very early in the morning, we received a report of a residence on fire. When a heat detector goes off in a garage, that tells me it’s [likely] an actual fire and a bad situation.

We were on the scene within a couple of minutes — 10 units with 31 personnel, four engines, two ladders, ambulances. There were flames, heavy smoke, and high-heat conditions. It was coming from the loft area of the garage, and the kids’ rooms were right on the other side of that wall. They were right next to where the fire was burning. Had the fire gone on undetected for 10 more minutes, it could have burned through that wall or smoke conditions could have gotten so bad, they wouldn’t have found their way out. 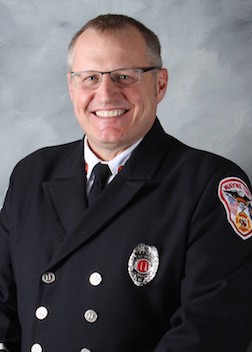 Amy: We weren’t even out of the house when the [ADT smoke alarm] started going off. It was this deafening, piercing sound — I am sure you could hear it a block in each direction. Within a minute and a half, we heard the fire truck sirens in the night. That was the best sound I ever heard. We were all huddled together — I was holding Parker in his little sleep sack. No one had any shoes on.

The scariest part was standing across the street watching flames shoot out of the attic; then the electricity went off. I didn’t know if the house was going to explode. We didn’t know how bad it was. I couldn’t wrap my mind around it — one minute you are asleep, and within five minutes you are outside watching your house burn.

For the kids, having fire trucks pull up in front of them was the best thing ever. Ella was mesmerized by all the activity. I said, “Can you believe all those fire trucks are here for us?” I was trying to keep her mind occupied and off the fact that her house was on fire. But all I could think about was all the baby pictures inside, their little outfits that they wore home from the hospital, their first hair clippings — the special mementos I thought I was losing that couldn’t be replaced.

‘Those Babies Could Have Been Gone’

The Wayne Township Fire Department got the fire under control within 15 minutes — and crucially stopped the fire from spreading from the garage to the house.

Fire investigators would later discover what caused the blaze: A day earlier, Tim had dumped embers from the backyard fire pit into a plastic trash bin in back of the house. He had first doused the embers with water, but they had smoldered, melted the trash bin, and ignited a fire in the adjacent can filled with trash. The flames crawled up the outside wall of the garage and crept inside through the eaves. 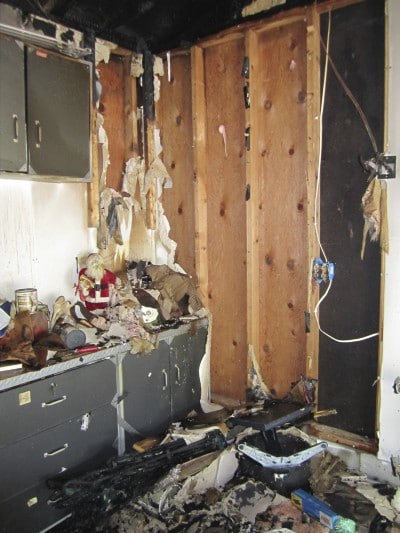 Capt. Pruitt: With fire, it’s all about early detection. The majority of our fire fatalities have been because there is no detection system in place or people fail to maintain them. They have no early warning, and they die in their sleep.

Sherry: The next day, I got an email from my [coworker], who had followed up on what happened. “You won’t believe this,” she said. She sent me the newspaper and TV reports. She told me that Amy had called back and said that I had saved her kids’ lives. Then I found out the kids were similar ages to two of my grandchildren. It made my knees buckle. Those babies could have been gone.

Each year, 2,500 people die and 12,600 are injured in house fires. Most deadly fires occur when people are asleep. If there is a fire in your home, you have less than 3 minutes to get out — Federal Emergency Management Agency

‘That Call Saved Our Lives’

Amy: When we were able to get back into the house, we could see the smoke was starting to come up through the closets into the kids’ rooms. The carpets were sooty, the baseboards were black. It would have been the kids next. It was the only place for the fire to go. That call from ADT helped save our lives. And the fast response of the fire department helped save our house. 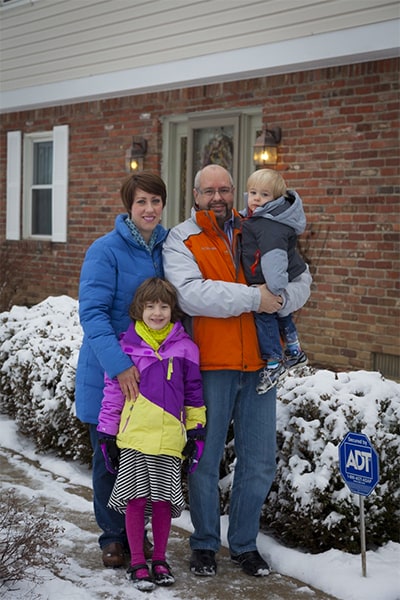 Sherry: I think about them every day. I sent the kids a Valentine’s Day card, and they sent me a Mother’s Day card. [Soon after the fire], Amy sent me a letter. It touched me very deeply. It is one of my treasures, and I keep it with my [ADT LifeSaver] award.

The first time I laid eyes on Amy [at their Jan. 9, 2014 reunion sponsored by ADT], it was like we had known each other forever. She was crying and said, “Thank you so much.” Then she turned to Ella and said, “Isn’t there something you wanted to say to Miss Sherry?” Ella said, “You’ve got to be so brave.” I said, “I was just doing my job. But I am glad you think I am brave.” This is my job — but it is much more than a job.

The Kindness of Friends and Strangers

Amy: We were out of the house for five weeks. We stayed in a hotel, where Ella could only have one stuffed animal. You can’t understand what it’s like — your house going on fire and the trauma of being forced out in the middle of the night. Where do you go? Who do you call?

We stayed with our best friends the first couple of nights. [After that], my mom would take the kids and keep them occupied. Another friend let me pick through her kitchen supplies for our hotel room. It is such a good feeling to know you have people around who want to help you. 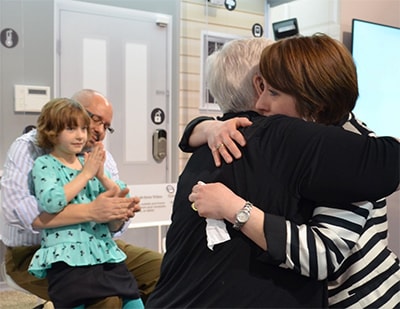 We saw grace everywhere we looked. One day, Ella came home from school with $1,000 worth of store and restaurant gift cards in her backpack. Her teacher had taken up a collection.A woman came up to Tim and gave him a hug and a gift certificate to a restaurant.

We have always tried to be generous. But this taught us to be more aware of the little things that people need — extra coins at the laundry or an extra hand with the kids. You never know when you are going to be in need. It could be any one of us.