HIGHEST AND LOWEST STATES AT RISK FOR BURGLARY

If you’ve ever been the victim of a burglary, you know that terrible, sinking feeling all too well. You get home, and something is amiss. Maybe a door is ajar, or a window is broken. Someone has invaded your privacy, rifled through your belongings, and shattered your feeling of security.

If you’re lucky, the only things missing will be electronics, which can easily be replaced. The intruder may have also absconded with irreplaceable personal items – a treasured piece of jewelry, a sterling silver family heirloom, a camera with photos you haven’t downloaded yet. They haven’t just taken your belongings; they’ve also taken your peace of mind.

According to the FBI, there were nearly 1.6 million burglaries in 2015 – roughly one every 20 seconds. Of those, about 72 percent were residential burglaries. Read on to see which cities and states have the highest and lowest odds of burglary, and what 400 convicted burglars shared about their motives and methods. 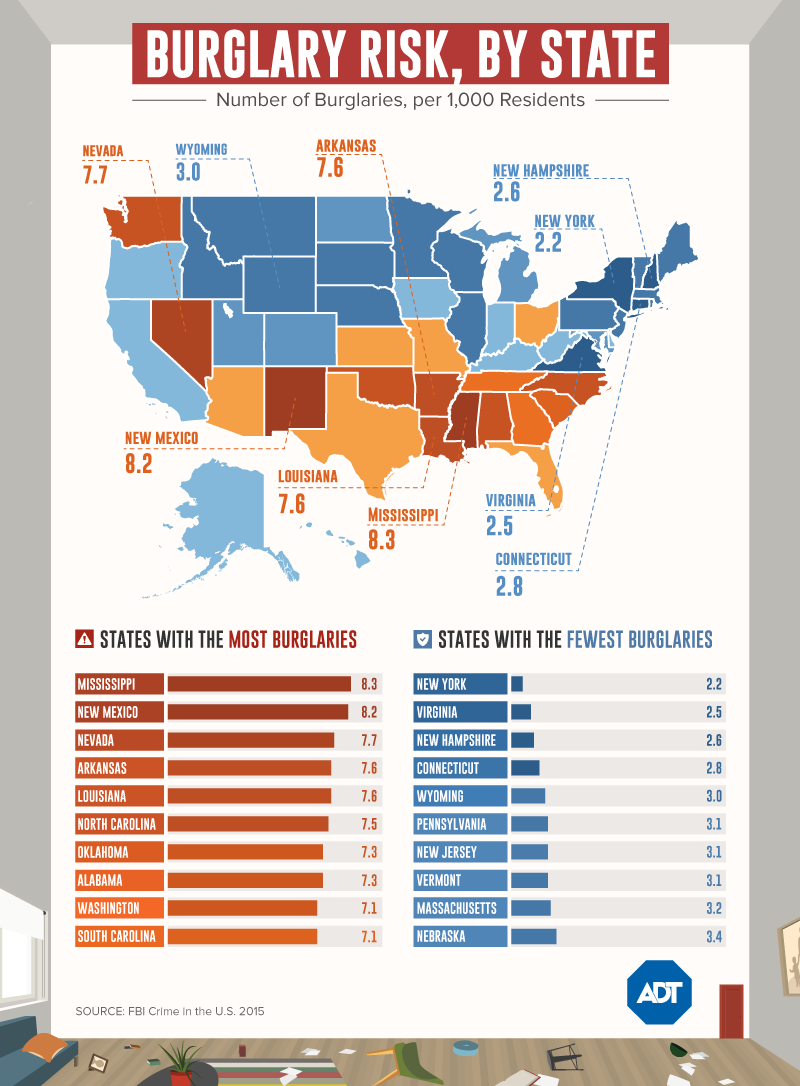 Based on the findings, Mississippi had the highest number of burglaries per 1,000 residents (8.3), followed by New Mexico (8.2) and Nevada (7.7). In past years, New Mexico had the highest number of burglaries, but only recently did Mississippi overtake it. With less than three million residents, Mississippi’s warmer weather and unoccupied vacation homes may give burglars greater access because people tend to leave their windows and doors open.

New York had the fewest burglaries, with roughly two per 1,000 residents. Though there are more than eight million New York City dwellers, the high density of people in a small geographical area doesn’t seem to play a role in the number of residential burglaries that occur. Weather may also play an integral part – with shorter days and colder nights, people are less likely to leave their homes during the winter months, giving burglars fewer opportunities to commit a robbery. 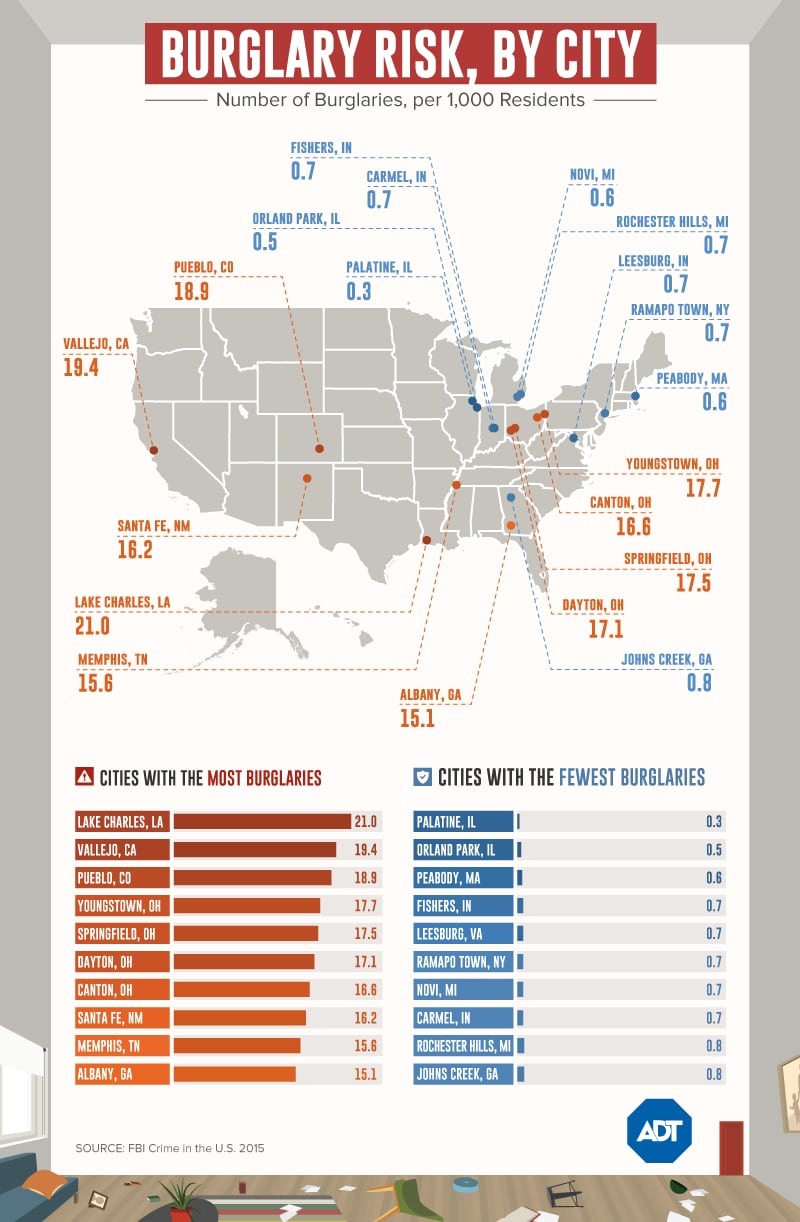 According to the FBI, Lake Charles, Louisiana, had the highest number of burglaries per 1,000 residents (21). About 88 percent of all reported crimes in Louisiana are property crimes, which include burglary.

Looking at the cities with the fewest burglaries, Palatine, Illinois, only had 0.3 burglaries per 1,000 residents. Orland Park, Illinois, and Peabody, Massachusetts, had 0.5 and 0.6 burglaries respectively. While it’s hard to pinpoint the root cause of these burglaries, cities with low amounts of crime share similar social and economic characteristics, such as low unemployment rates, higher education levels, and small populations.

Burglars Reveal: Why and How? 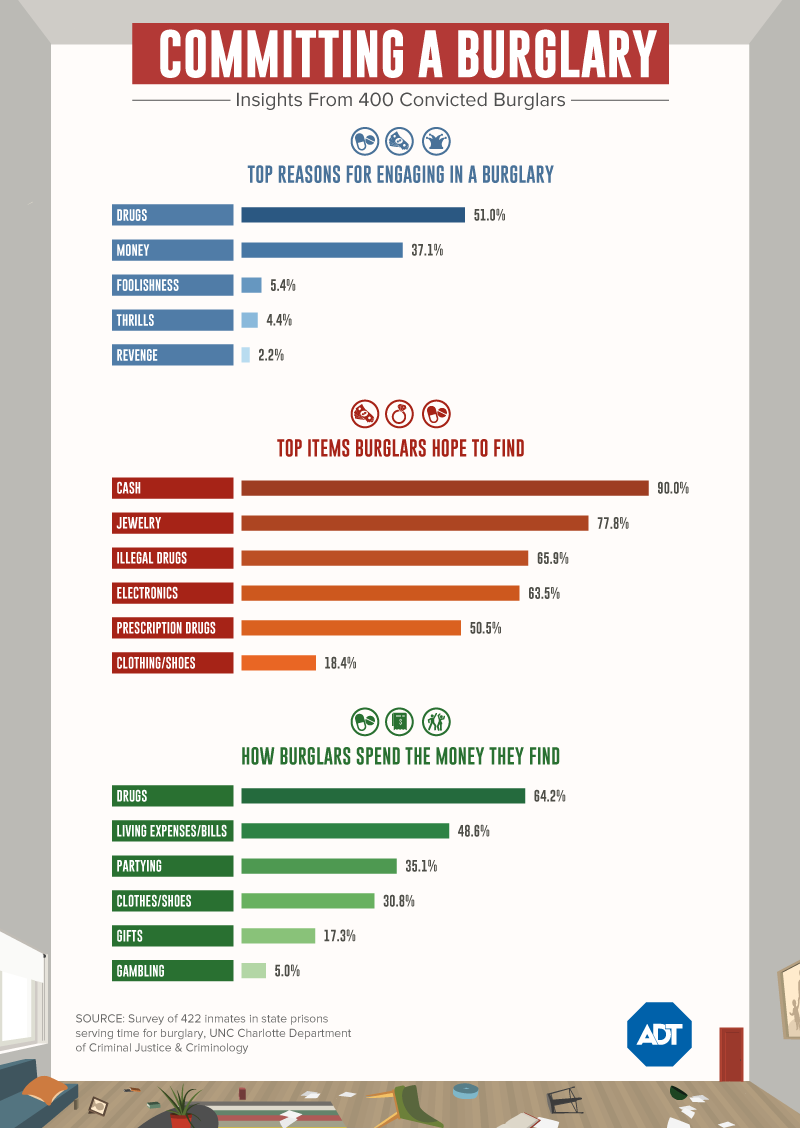 People most commonly steal because they cannot afford what they want. Facing unemployment and a lack of resources, some people in need might commit petty crimes to make ends meet. Still, others break into homes to possibly curb a drug dependence.

More than half of the 400 convicted burglars surveyed admitted that they broke into homes in search of drugs. However, respondents also stole for other reasons, including money, foolishness, thrills, and revenge. Revealed in the survey, the top items burglars hoped to find were cash, jewelry, and illegal drugs. After obtaining these possessions, many of the burglars spent their loot on drugs, bills, and partying. 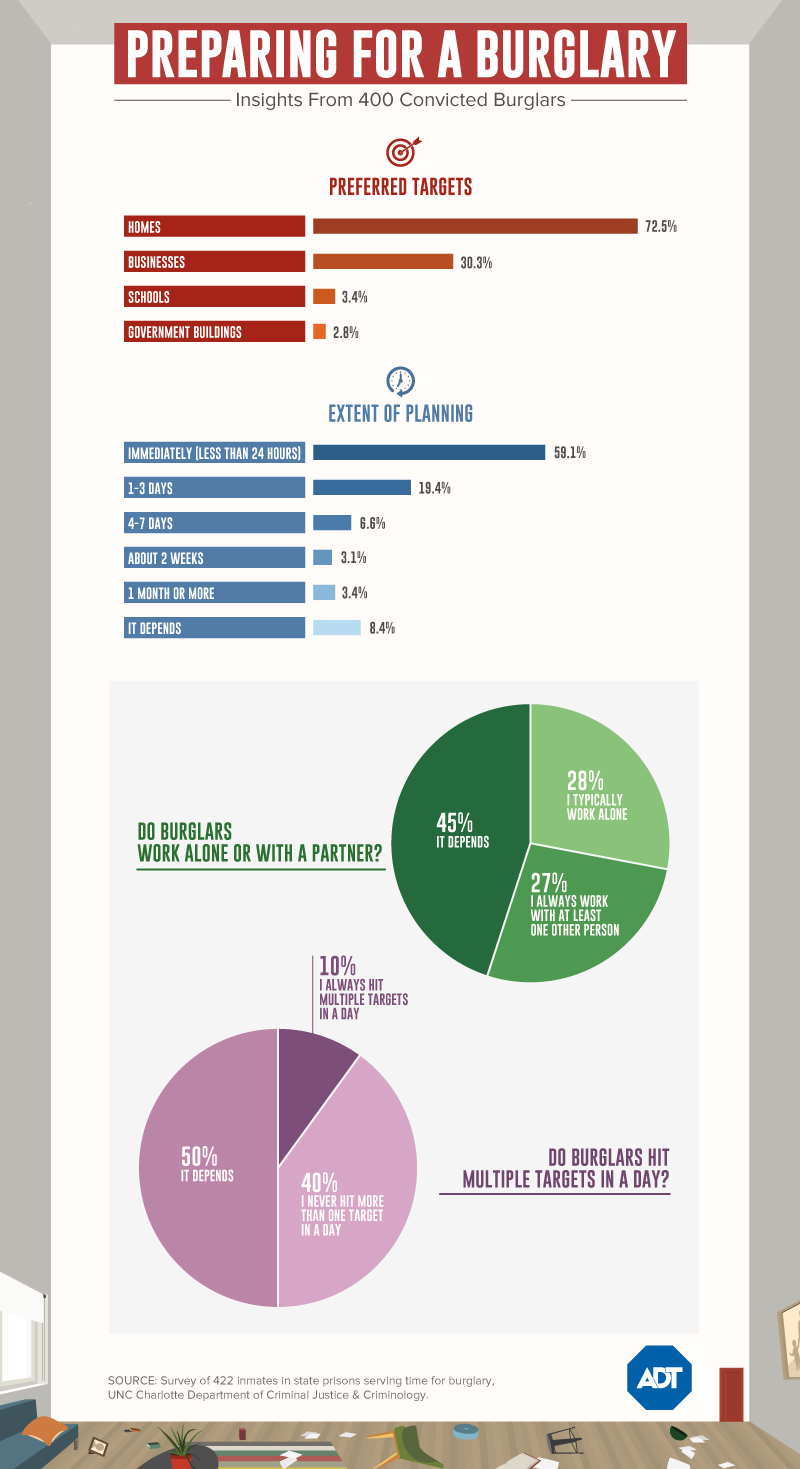 Most burglars appear to look for homes that are easy targets and require very little foreplanning. Recent studies show that burglars often use unforceful points of entry – such as unlocked or open doors and windows – to enter residential homes. Before breaking in, burglars may case your home for less than 24 hours, gauging your daily routine. The 27 percent of burglars who always work with a partner may need a “look-out,” an extra set of hands to lift heavier items, or a getaway driver. Due to crimes of opportunity, your home may not be the only home broken into within 24 hours; roughly 10 percent of burglars hit multiple targets on the same day.

Despite commercial properties having a variety of ways to prevent burglaries, according to the study 30 percent of the convicted burglars said they targeted businesses. However, commercial crimes, like burglaries, are often linked to current or ex-employees. Stores are frequently targeted based on the items sold in the store, surveillance, accessibility, and location. 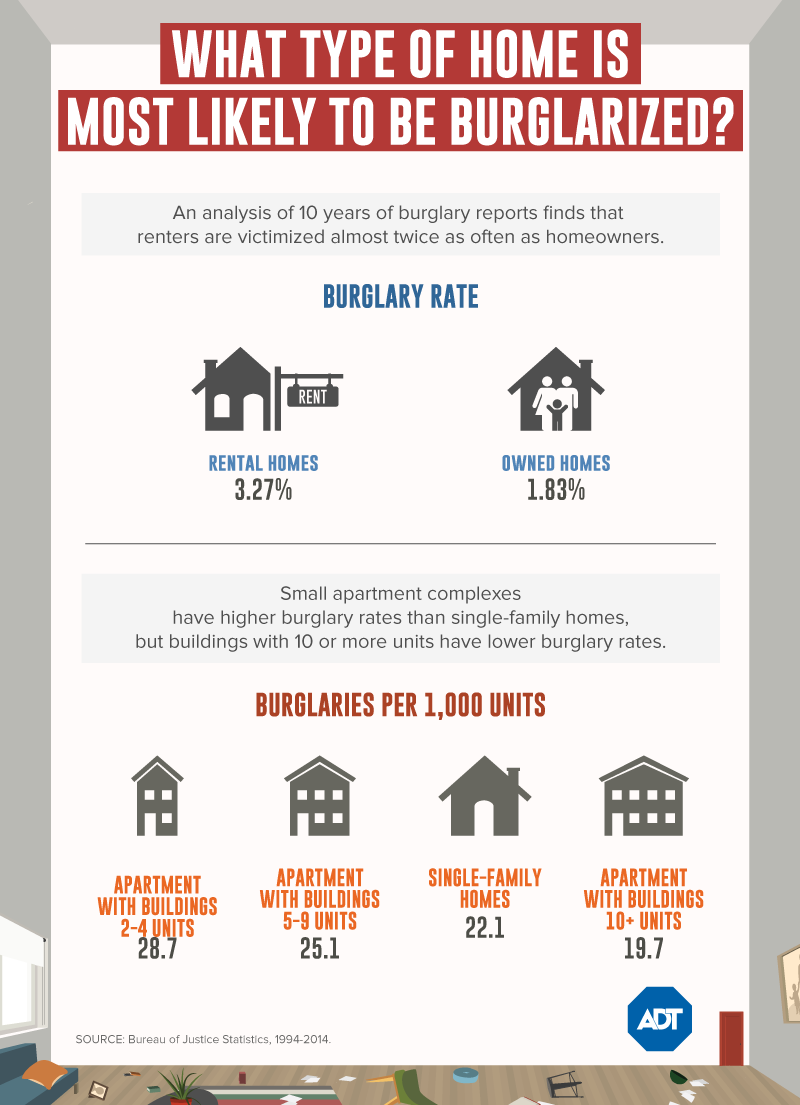 According to the survey, as well as recent studies done by the Bureau of Justice Statistics, renters are more likely to experience break-ins than homeowners. Apartment buildings with two to four units typically see the highest amount of burglaries. This is probably because plenty of people come and go from apartment complexes daily, whiles homes only have a few family members who enter or leave. 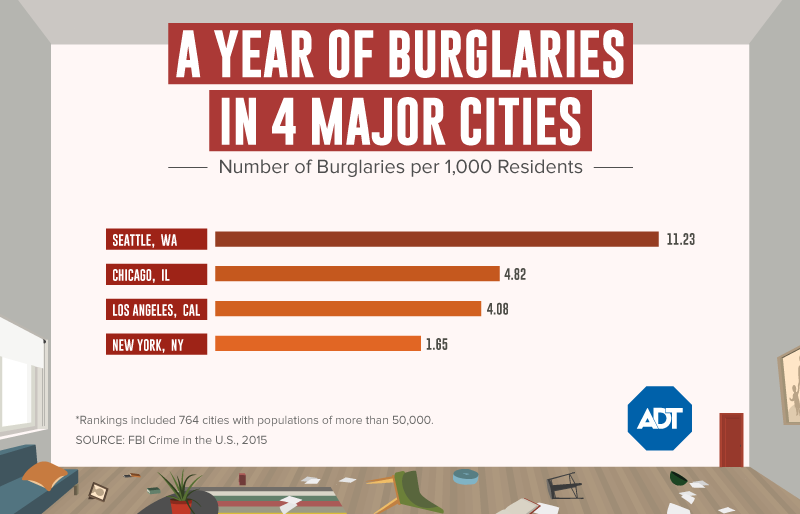 Of all property crimes, burglary and larceny are the ones you are most likely to experience in the U.S. Data from city police records depict a year’s worth of burglary patterns in four major U.S. cities: New York City, Los Angeles, Chicago, and Seattle. Each red dot represents a burglary incident.

Throughout 2015, Seattle’s suburbs were permeated with property crime and experienced the highest amount of burglaries – 11.3 per 1,000 residents. Contrary to television and movie depictions, New York City actually had one of the lowest burglary rates of any major urban area in the U.S. As of 2015, Chicago (5.14), Los Angeles (4.13), and NYC (1.56) still remain the major cities least affected by burglary.

What Burglars Don’t Want You To Know 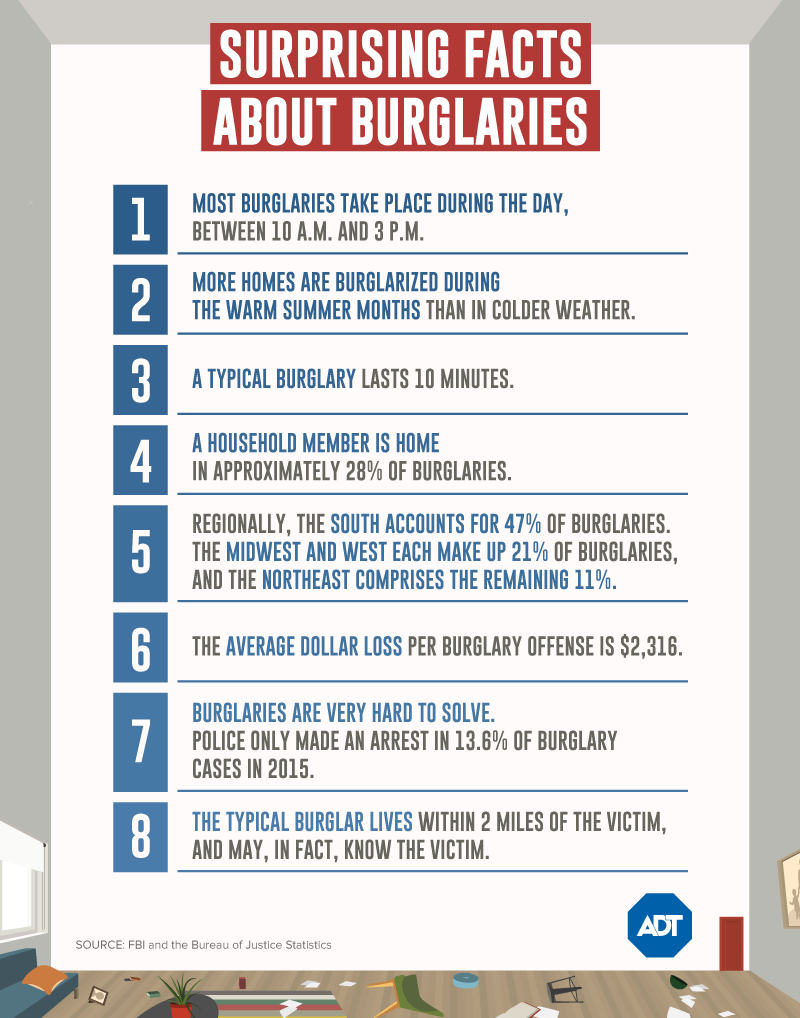 Unfortunately, burglaries are often difficult to solve. Stolen items are rarely returned, and victims rarely face their intruders, even though statistics conclude that the typical burglar lives within two miles of the victim and may even be an acquaintance. For every house broken into, about $2,000 in cash or items is stolen. Burglars prefer to break into homes between 10 a.m. to 11 a.m. and 1 p.m. to 3 p.m., when it is unlikely that someone will be home. Shockingly, a household member is home roughly 28 percent of the time.

Burglary not only disrupts personal finances and safety, but it can also invade your serenity. If your home becomes a possible target, you may feel less secure staying there. Understanding when and how a burglar steals will not necessarily prevent them from breaking in. However, having preventative measures in place can help ward off criminals. Whether you live in an apartment or a single-family home, a major metropolis or a suburban area, there are many ways to help make your home – and family – more secure, even on a budget. After all, your home should be where you feel safest. Here are some steps you can take to feel more secure in the place you call home:

ADT is the nation's most trusted service for home security, helping to protect millions of residences and businesses with advanced monitoring systems. To ensure a rapid response in times of emergency, ADT offers technologically advanced security options, including remote video access and flood detection sensors. When it comes to all things security, ADT.com is a safe bet.

The FBI’s Uniform Crime Reporting (UCF) Program receives data from over 18,000 city, university/college, county, state, tribal, and federal law enforcement agencies. The information in this study was based on the FBI’s 2015 Crime in the U.S. report, which compiles all of that information. It was released in September 2016.

The insights from convicted burglars came from written surveys completed by 422 inmates serving time for burglary in state prisons in North Carolina, Kentucky, and Ohio. The inmates who participated in the study ranged in age from 18 to 64 (mean age: 32.9). They included 275 men and 147 women. Two-thirds (67 percent) of the sample respondents were Caucasian, 25 percent were African American, and the rest were mixed or other races. The study was performed by a research team from the University of North Carolina Charlotte’s Department of Criminal Justice and Criminology.

The selection of New York, Los Angeles, Chicago, and Seattle for the interactive maps was guided by each city’s size and the availability of geotagged 2016 crime data. Each incident was plotted using information from that city’s public crime incident reports. In all cases, data were from 2015 or 2016.

© 2018 ADT LLC dba ADT Security Services. All rights reserved. ADT, the ADT logo, ADT Always There and 800.ADT.ASAP and the product/service names listed in this document are marks and/or registered marks. Third party marks are the property of their respective owners.