You may have heard the phrase, “The early bird gets the worm,” but when it comes to getting things done during the day, early to bed and early to rise won’t necessarily make you more productive.

In fact, studies have shown our tendencies to be either early birds or night owls is actually hardwired into our DNA. Sleeping in regularly might look like a lazy habit on the surface, but there’s only so much you can change about your body.

And that might not be a bad thing after all. People who like to stay up later in the evenings and wake up later in the mornings can be much more creative than their early bird counterparts and equally as productive.

Whichever your inclination, the odds are you're not alone. In fact, some states are more likely to cater to early risers, while others are indulging the night owls instead. To learn more, we took a closer look at which cities and states are more active during the early morning hours and which prefer to sleep in instead. We even looked at how these trends could impact the way you think about leaving home unattended – at night and during the day. Let’s take a look.

When it comes to living in (or even just visiting) a big city, one of the first things you might notice is the incredible diversity and selection of places to eat, shop, party, or just hang out. Whatever your interests, you’re sure to find something that fits your style in places like New York City, Chicago, and Miami.

But is it true these major metropolitan areas don’t sleep at all? Not necessarily. In these maps, we’ve broken down just how busy it gets on an average Saturday in the 10 largest American cities. As it turns out, each city has its own energy trend and may cater better to people who prefer getting up early or sleeping in late.

New York City is home to three of the world's busiest tourist destinations: Times Square, Central Park, and Grand Central Station. Given all of that foot traffic (adding up to an average annual tourist count of nearly 63 million people in 2017), you might think the lights never go out in New York City. Many lights do stay on, in fact, but the city definitely sleeps. Many of the popular neighborhoods don’t get truly active until 9 a.m. or 10 a.m. and tend to deflate in the early hours between 1 a.m. and 2 a.m. If you’re a night owl, New York City could be for you! Getting up later in the day means you won’t miss much of the action, and you certainly won’t be alone if you’d rather stay out later, too.

That trend doesn’t hold true everywhere, though. In Miami, Florida, and Washington, D.C., general activities start much earlier in the morning. Whether it’s an attempt to beat the crowds or the heat, both D.C. and Miami are relatively active between 7 a.m. and 8 a.m., peaking just after noon, and dying off for the evening around midnight. If you live in cities where you’re more likely to be out of your house earlier in the day, you might want to think more carefully about your home security. Despite what you may think, burglaries are actually more likely to occur between 10 a.m and 11 a.m. or 1 p.m. and 3 p.m., which could mean people getting an earlier start to their day are also more likely to leave their homes at risk.

Keep reading as we explore each state, their energy trends, and where your sleeping habits might be more at home. 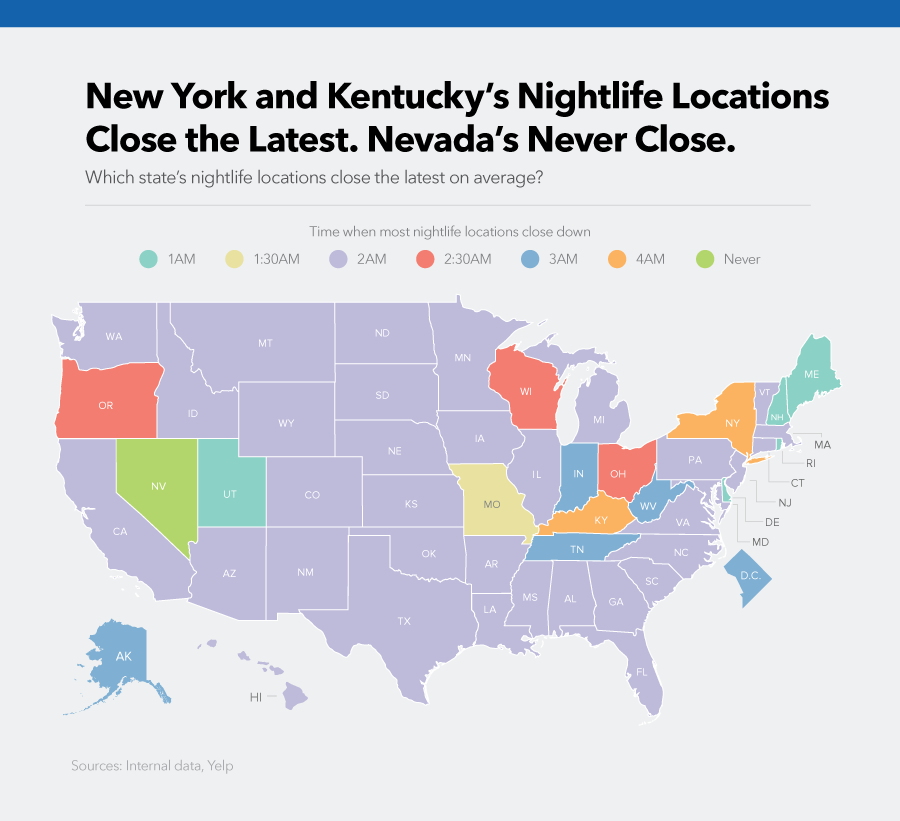 If you’re looking for locations with the convenience of restaurants, cafes, and overall entertainment that (almost never) closes, these ZIP codes should be on your radar. Whether you’re looking for a place to go out dancing until the wee hours of the morning or just a spot to hang out with friends that’s open later than normal, these states might have the vibe you’re looking for.

The Northeast might be known for its laid-back coastal living, but in states like Delaware, Maine, New Hampshire, and Rhode Island, you won’t have any problem finding entertainment open until 1 a.m., on average.

For a vast majority of the country, though, closing time for most entertainment is roughly 2 a.m. States like Florida, Texas, California, and New Jersey can accommodate your social needs way past traditional bedtime hours.

Looking for high-energy spots open even later than that? In New York and Kentucky, the fun can continue until 4 a.m., later than every other state in America except one. In Nevada, many of the most popular gathering spots actually never close. The options for 24-hour dining, entertainment, and fun are nearly endless; especially in Las Vegas.

Thinking about traveling to some of these nightlife destinations? Peak travel seasons tend to be the most common time of year for break-ins and theft. Before you take off to enjoy the lights and action of New York City or Las Vegas, you might want to consider taking a few extra steps to protecting your home before you go. An alarm or home security camera system with remote access might be the perfect travel accessory if you’re looking for the ultimate peace of mind. Don’t think just having a sticker in your window or sign on your lawn will do the trick, either. Most thieves aren’t deterred by fake security signs. Instead, visible security systems and cameras are your best bet for protecting your property when away from home. 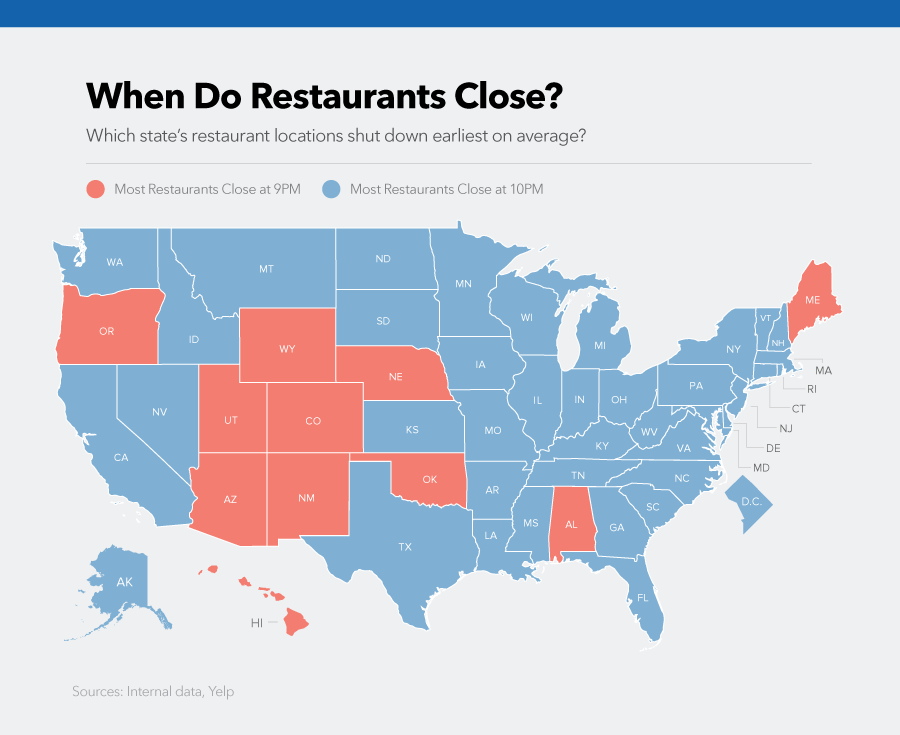 Being a night owl or an early bird can have its perks, but when it comes to sitting down for dinner, experts pretty much agree: Earlier is better.

How early or late you eat dinner can actually impact your physical and mental health, more than just being a personal preference or scheduling concern. Late-night snacking or the occasional after-hours meal is one thing, but eating late consistently could make it harder to fall asleep at night and might even cause you to pack on a few extra pounds.

Still, you can’t always help it when the cravings hit. If you’re more of a night owl anyway, you might look for where restaurants close later rather than earlier. On average, a majority of restaurants in America close around 10 p.m. In a few Western states like Arizona, New Mexico, and Wyoming, you might need to get your dinner fix in a little bit earlier, as the average closing time for restaurants in these states is 9 p.m. 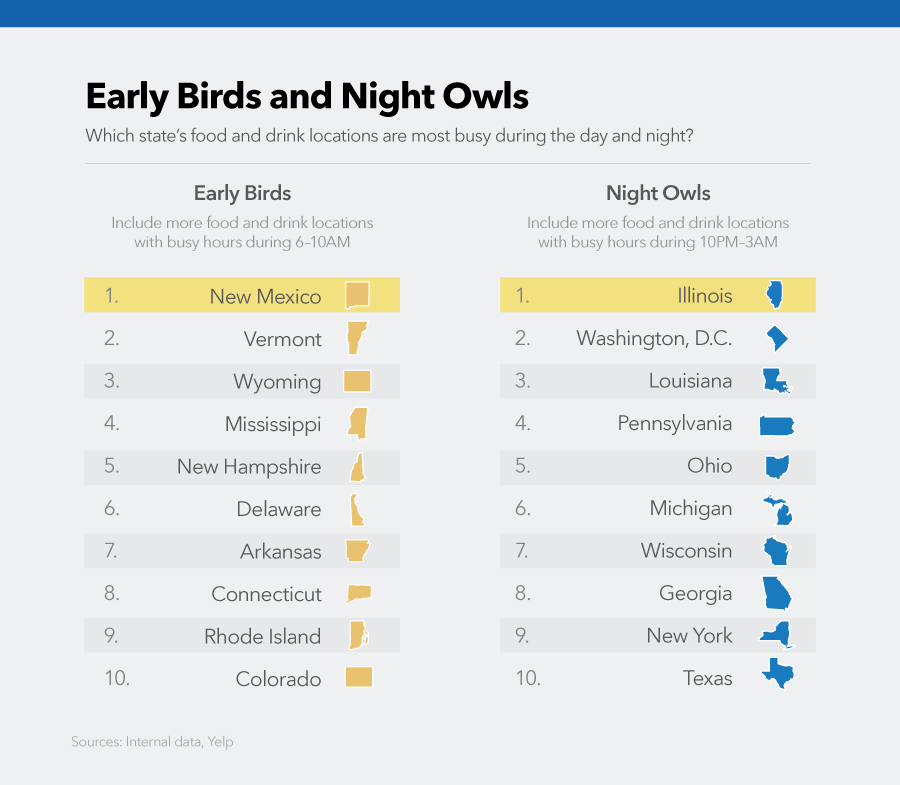 Whether you consider yourself an early bird or night owl, your body adjusts to the times of day you typically prefer being asleep or awake. If you’re an early riser, for instance, you’re more likely to enjoy breakfast compared to dinner. Studies have shown early birds also tend to be somewhat older, while younger people often enjoy later bedtimes (and later starts to the day).

Whichever your preference, you might like to know the area you live in shares a somewhat similar routine. Birds of a feather flock together, after all, and it might help if restaurants, bars, and cafes are open during the hours you’re most likely to be awake.

If you think early to bed, early to rise is the way to go, you might find similar attitudes from people in states like New Mexico, Vermont, New Hampshire, and Wyoming. Among a few others, these areas were busiest between 6 a.m. and 10 a.m.

Rather sleep in? That’s OK, we’ve got options for that, too. We found food and drink establishments in Illinois, Pennsylvania, Louisiana, and Michigan, as well as Washington, D.C., were more likely to be busy between 10 p.m. and 3 a.m. If government officials and political to-dos are what come to mind when you think of our nation’s capital, think again. Whether you’re looking for a luxe night out on the town or a Moulin Rouge-inspired ambiance, you can find almost anything in Washington, D.C., and it’s all open late. 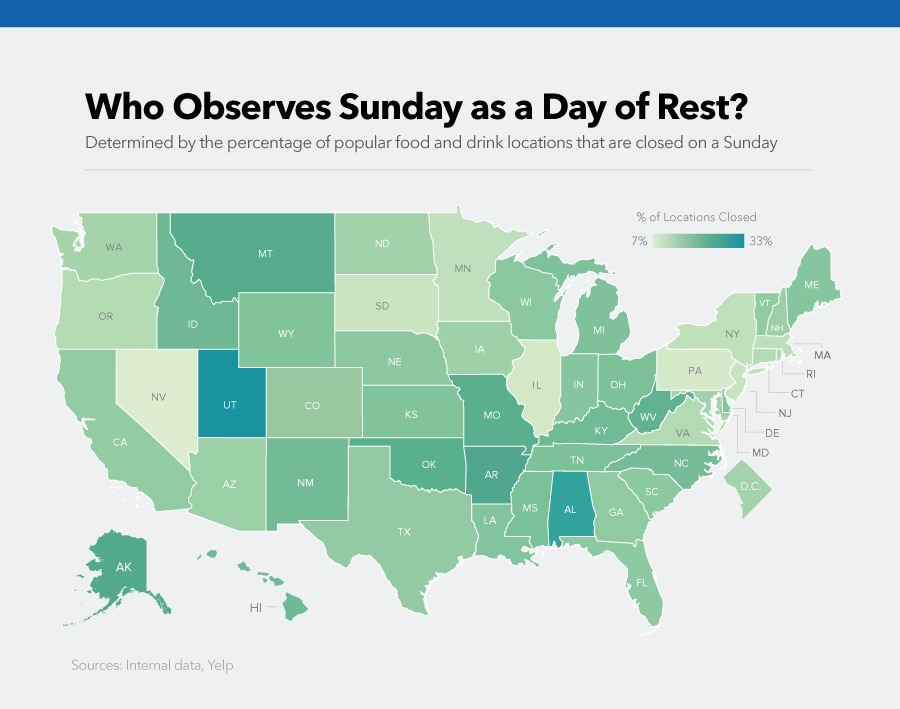 When you work hard all week, there’s nothing like looking ahead to the weekend and knowing you’ll have at least one day of rest and relaxation. Historically, that day has been Sunday. While observing Sunday has roots in religious ideologies, Americans today see it as a cultural norm.

According to one study, 62 percent of people think it’s important for society to have one day set aside each week dedicated to rest. And in some parts of the country, that means businesses are more likely to shut down, too.

Staying home can also be good for your home security. Most burglars admit they’d think twice before trying to break into a home with a car in the driveway, saying it’s typically a sure sign someone is home. Thieves prefer homes they see as easy targets, and homes with security cameras or obvious systems (as well as someone home) are more likely to be avoided.

Whether you’re traveling or just looking for something to do on a Sunday afternoon, businesses are more likely to stay open all weekend in states like Nevada, Pennsylvania, Illinois, and South Dakota.

If you’re looking for your next major travel destination, you might want to pick a city that’s more likely to be awake when you are. Even major metropolitan areas like New York, Chicago, and Miami have their morning and evening tendencies, which means your sleep cycle might be better suited to one destination over another. Even restaurant closing times vary across the country, and if you’re a late night eater, it might help to know where you’ll be able to get those after-hours snacks when the craving hits.

And if you’re planning on traveling this year, make sure you leave your home protected. At ADT, we’re here to protect your home and family no matter where you are. With our home automation, security cameras, and fire safety solutions, you’ll have the ultimate peace of mind when you need it most. And with ADT SoSecure, our new mobile safety app will help keep families connected and safe on-the-go. Visit us online at ADT.com to find the perfect home alarm and security system today.

We collected business activity data from major and minor towns and cities within all 50 states in the United States. General business information was collected from Yelp’s Fusion API, while activity data come from internal sources. The data were analyzed and visualized with Tableau.

Want to share our findings on average daily business activity in major cities? Feel free to share our images and content for any noncommercial purpose. We only ask that you credit us with a link back to this study so our authors get credit and readers can get the full story.