According to the National Fire Prevention Association (NFPA), smoke and toxic gases are the most significant factors in loss-of-life fires. Almost 70% of all building deaths are associated with smoke inhalation.*

The prompt and safe evacuation of building occupants and immediate notification of the fire department are the primary means to prevent loss of life, as well as loss of property. The principles for saving building occupants from a fire are delineated in NFPA 101, Life Safety Code, and NFPA 72 for fire alarm systems.

Working in tandem with the alarm and detection systems are sprinkler systems. When inspected and maintained properly, and ensured they haven’t been tampered with, sprinkler systems are designed to extinguish a fire. When a certain temperature is reached, a sprinkler head will activate and water will begin flowing, helping to put out the fire. NFPA 25 covers inspection requirements for sprinkler systems. Compliance helps maximize system integrity to avoid failure and ensure fast, effective response to a fire emergency.

Another layer of protection is required, often referred to as “defend in place.” In the event that a life safety system fails, is tampered with, or in a situation in which occupants in a facility cannot be easily evacuated, as is the case for the ambulatory, elderly, incarcerated and others, passive fire protection can play a key role in saving lives.

This oft-neglected additional layer called Passive Fire Protection (PFP) can help compartmentalize a fire to its origin as well as help to slow the spread of fire and toxic gases to other areas of the building. The most commonly cited codes associated with passive fire protection are NFPA 80, 105 and 90A. NFPA 80 covers the installation, care and maintenance of many types of fire doors and opening protectives. More specifically, it requires that all fire door assemblies be inspected and tested yearly. While NFPA 90A provides fire duct installation requirements.

As a matter of clarification, active fire protection (AFP) is comprised of systems that require a trigger to work efficiently in the event of a fire. Those triggers may be manually operated, as is the case with a pull station or fire extinguisher, or automatic, like a smoke detector, heat detector or fire sprinkler head, but all require some action to be performed to engage the systems.

Passive fire protection (PFP) are made up of systems or components that compartmentalize a building using fire-resistant rated walls, floors and ceilings. Compartmentalizing a building into smaller sections helps to slow or prevent the spread of fire or smoke from one room to the next. PFP helps to limit the amount of damage done to a building and provides its occupants more time for evacuation. In addition, it helps protect first responders who have a better chance of putting out a fire that is compartmentalized, versus the added danger of trying to put out a fire that swells to encompass an entire building. PFP components include fire/smoke dampers, fire doors and fire walls/floors.

An argument for active fire and passive fire protection systems

While AFP systems are highly regulated and must conform to strict installation, maintenance and inspection guidelines established by the NFPA and enforced by the local AHJ, passive systems often take a back seat. There is a valid argument for both; active protection could fail due to a number of reasons, including low water pressure for sprinkler systems, or clogged or broken lines, while passive systems may allow occupants more time to flee, but do very little to stop the spread of the actual fire.

The following sections outline the various components that make up a comprehensive fire protection plan for any facility including both active and passive solutions.

Alarm and detection: The first line of defense

Coined “alarm and detection” by the industry, there are several key components of an active fire protection system that are necessary to initiate occupant action. They include:

These are the brains of the system. They are highly regulated and require a minimum of one annual inspection to test the activation of audible and visual devices, relay outputs, annunciators, elevator recall, release of magnetic door holders and many other functions. In addition, the control panel batteries, an integral part of the system, are required to be replaced every five years from the date of manufacture.

These sensing devices are designed for early detection of smoke and fire. They require periodic inspections and functional testing, as well as smoke detector sensitivity testing. Note: Functional testing does not mean using a magnet, but rather using canned smoke or an equivalent.

These include alarms (horns/bells/speakers) connected to the detection system and strobe lights. These components are tested as part of the annual inspection.

Other key elements of the system include:

Sprinkler systems: Another crucial piece of the puzzle to extinguish fires

Automatic fire sprinklers have been in use since 1874, the same year that ADT was founded. Following are a few statistics provided by AFSA (American Fire Sprinkler Association) to keep in mind:

These devices must be inspected when a commercial building first opens, one year later, and then every four years for commercial buildings and every six years for hospitals.* Note that alarm contractors may not always perform required testing. In some cases, they may only test the alarm relay from the fire alarm panel and may not mechanically exercise the damper as required by codes.

A firestop is a fire protection system made of various components used to seal openings and joints in fire-resistant rated wall or floor assemblies. For penetrating cables, these can also be called Multi Cable Transits (MCTs). Firestops are designed to restore the continuous fire resistance of wall or floor assemblies, impeding the spread of fire by filling the openings in them with fire-resistant materials.

Routine monthly testing with an annual 90-minute load test is required, and should include verification that light beams are properly aimed.‡

Life safety plans should be as comprehensive as possible, and must include alarm and detection, suppression and passive fire protection to truly be a comprehensive plan. Passive fire protection should be addressed by owners and facility managers alike, even if the local authority is not enforcing the codes. Together, these components are critical in helping to prevent loss of life and property, in the event that a fire does occur, and mitigate overall damage. 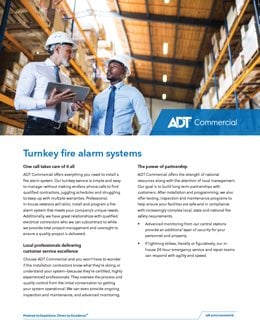 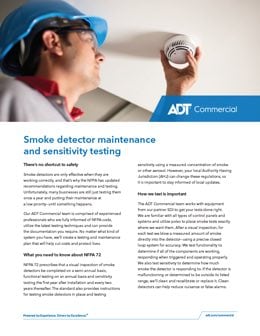 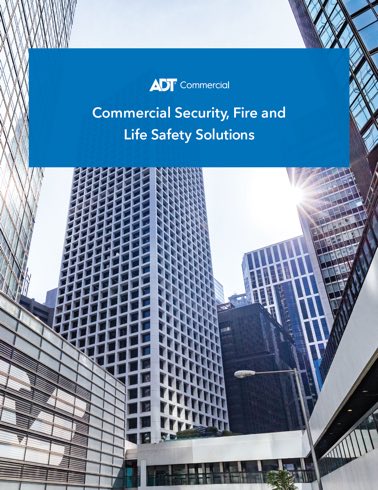 Call
or
Get A FREE Assessment

Expect a call from an ADT Commercial Security Specialist as soon as possible.